The failure to lay out rescue rules makes it harder for healthy firms to raise new money, only adding to instability. 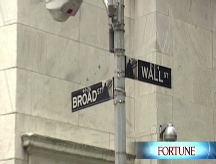 Henry Paulson, the Treasury secretary who along with Fed chief Ben Bernanke has headed up efforts to contain the financial sector's problems, has indicated he will act as necessary to restore confidence.

But so far, that's not happening - and some market watchers are warning that rescues such as Tuesday's emergency loan to AIG (AIG, Fortune 500) are actually making it harder for financial firms to raise the money they need to muddle through the credit crunch.

That worry has in turn only created further instability, feeding massive selloffs like the ones Wednesday on Morgan Stanley (MS, Fortune 500) and Paulson's alma mater, Goldman Sachs (GS, Fortune 500), Wall Street's two remaining independent investment banks. Morgan fell as much as 38% to a 52-week low and Goldman slid 25%, dropping below $100 a share for the first time in three years.

The falling share prices are more than a spectacle: If investors lack confidence and financial firms can't raise cash, lending to businesses and consumers could further decline, dealing another blow to an already weak economy.

The decision to stand behind the firms' bonds has saved debtholders from taking big losses and staved off the oft-mentioned prospect of cascading defaults in derivatives markets.

Meanwhile, in a nod to so-called moral hazard - the notion that bailouts only lead to greater risk-taking by those who think they'll be saved - the government let brokerage firm Lehman Brothers (LEH, Fortune 500) collapse early Monday, leaving its investors with heavy losses.

Officials point to Lehman and the near wipeout of shareholders at Fannie, Freddie and AIG as evidence that the government won't write investors a blank check.

But Wall Street has had a different takeaway. There, investors are trying to figure out what, if any, rules are guiding Paulson and other policymakers in their decisions to intervene - and noting the unhappy implications of support for the companies' creditors.

"In an economy that needs to and is trying to de-lever, how can it possibly be a good idea for the government to repeatedly protect debtholders from losses?" asks Andrew Moloff, chief investment officer at Evercore Asset Management. "How can the financial system provide badly needed equity capital when the government is essentially subsidizing debt capital?"

Those are pressing questions in light of the financial sector meltdown that has been in progress since Paulson surprised the market two weeks ago with his plan to nationalize Fannie Mae and Freddie Mac.

Though Fannie and Freddie had long been criticized for their thin capitalization, heavy leverage and potential burden on taxpayers, the decision to take the companies under government conservatorship nonetheless shocked investors who had taken Paulson's previous support for Fannie and Freddie - and the feds' repeated characterizations of the firms as adequately capitalized - at face value.

Paulson said he took the companies under government control because he wanted to stabilize the market. But if anything, the move had the opposite effect, causing investors to flee the common and preferred shares of other firms whose potential exposure to problem mortgages meant they might need to raise capital.

What's followed has been a free fall in shares across the financial sector - first at Lehman but subsequently at AIG and Washington Mutual (WM, Fortune 500), and lately at Goldman and Morgan Stanley - that has had the effect of preventing these companies from raising new equity.

Though neither Goldman nor Morgan Stanley has shown signs of the decline visible at Lehman or AIG, it's also true that six months ago few thought Lehman, with liberal access to government loan facilities, would follow in the footsteps of Bear Stearns.

What are the rules?

Since March's collapse of Bear - in which the Fed provided a $29 billion backstop of fire-sale purchaser JPMorgan Chase (JPM, Fortune 500) - it's been hard for investors to discern the guiding principles in the government's moves. Take the failure of Lehman, which like Bear was a primary dealer of government securities and was thus seen as a likely recipient of federal assistance.

"Uncertainty is heightened when the central bank constantly changes the rules and when it fails to explain itself clearly," writes David Kotok, chief investment officer at investment adviser Cumberland Advisors. "The result is that market agents read into the actions, and the uncertainty premium rises."

The perception of rising risk is visible in the soaring cost of interbank funding - the cost of borrowing overnight bank funds more than doubled Monday to 6% - and in the latest leg down in the stock market, where the Dow Jones Industrial Average tumbled 300 points in midday trading Wednesday.

Roger Ehrenberg, a former executive at Deutsche Bank who's now a private investor and author of the Information Arbitrage blog, says the government's failure to draw a line between firms that are too big to fail and those that aren't "makes it extremely difficult to raise equity capital" in the current environment, though he notes Paulson's actions aren't the only factor.

After all, troubled firms have raised tens of billions of dollars from foreign and domestic sources over the past year, only to see their shares plunge anew, wiping out vast swathes of newly invested capital. And the financial sector's disclosure continues to fall well short of best standards as well.

The case for RTC II

But if the government is going to somehow stop the bleeding, Ehrenberg says, politicians are going to have to put in place a more comprehensive plan to determine how to deal with troubled companies. He argues the current crisis will spur Congress to create a taxpayer-funded structure similar to the Resolution Trust Corp., created in response to the savings-and-loan crisis of the late 1980s. The RTC took on distressed real estate and other assets and eventually sold them off.

In the meantime, Ehrenberg says, it would help if Paulson - a longtime advocate of fuller disclosure from companies - would start practicing what he preaches.

"As anyone with children knows," says Evercore Asset Management's Moloff, "the way you teach lasting lessons is with consistency."