The Treasury secretary's bailout plan aims to shock and awe, but markets and pols fire back. 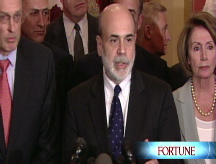 Paulson has proposed using $700 billion of taxpayer funds to relieve struggling financial firms of distressed mortgage assets. He did so, he said Friday, as part of a "comprehensive approach to relieving the stresses on our financial institutions and markets." He then spent the weekend and Monday on a non-stop sales call to TV studios and Capitol Hill offices.

But a selloff in the dollar and U.S. stocks shows that the stresses remain, if perhaps in different form. Investors spent Monday taking the two big pluses on the U.S. economic landscape in recent months - the recovery of the dollar and the collapse of commodity prices - and turning them back into minuses. The dollar dropped the most in its history against the euro, and oil prices surged as much as 22%. Early Tuesday, crude prices retreated sharply, falling below the $108-a-barrel mark.

The flight from U.S. assets reflects fears that the tab for the financial system bailout isn't about to be closed out any time soon. Paulson's plan for Wall Street creates an opening for congressional Democrats to demand a similarly costly plan for Main Street, says Benn Steil, director of international economics at the Council on Foreign Relations. Meanwhile, it's far from certain that the Paulson proposal - or the Main Street alternative - will do anything to stabilize tumbling values in the housing or asset markets.

"I'm extremely worried about this plan," said Steil. "This looks like something cobbled together in a panic."

Steil knows a thing or two about plans to clear the market for troubled mortgage assets, having presented one himself last December in the pages of the Financial Times. Steil and co-author Mark Fisch sketched out a proposal in which a new government entity, modeled after the Resolution Trust Corp. used in the savings and loan bailout of the 1980s, would evaluate mortgage-backed securities and classify those presented for sale in one of five tiers.

The government would offer to pay 70 cents on the dollar for Tier A assets, 60 cents for Tier B, and so on down to 30 cents for Tier E. The goal of this setup, Steil says, is to put a floor under asset values - an event that should bolster the credibility of financial companies' balance sheets. Setting a floor on the value of these assets could also entice the deep-pocketed opportunists who have largely kept to the sidelines - namely hedge funds and private equity funds - to enter the market, perhaps in some cases outbidding the government for the assets and thus limiting taxpayers' exposure.

Steil points to investments such as Citadel's purchase of troubled securities from E*Trade (ETFC) last November as an example of the types of deals that might take place given greater transparency on asset values. A similar but more recent deal had Merrill Lynch (MER, Fortune 500) selling a huge portfolio of troubled debt to Lone Star Funds for less than a quarter on the dollar.

By contrast, Paulson's plan threatens to turn $700 billion of taxpayer dollars loose on the marketplace, in an apparent bid to prop values up. But while details of the plan remain scarce, skeptics of the setup note an absence of the transparency that Paulson himself has been such an outspoken advocate of, and the fear that in the absence of private bidders for mortgage assets, the government's balance sheet will end up stuffed with junk.

"These are very toxic assets, whose valuations are extraordinarily uncertain at best," said Steil. "I can't see this not having an impact on the dollar."

Indeed, the dollar made its worst-ever daily showing against the euro Monday, slumping to $1.48 to the euro from $1.38 just two weeks ago. And the dollar could fall further once the fears of a financial system unwinding finally pass, whenever that happens. The greenback managed to crawl higher early Tuesday, up $1.47 versus the euro.

"Once the liquidity crisis subsides, the market is likely to focus on tallying up the bill to the U.S. taxpayer," wrote Merrill Lynch economist Alex Patelis. "We remain concerned with the repercussions that this crisis will have on financial flows into the United States against the context of a still large current account deficit."

The mortgage bailout is the latest episode in a long-running drama pitting Paulson and other policymakers against the unwinding of the credit bubble that inflated earlier this decade.

In one memorable scene in July, Paulson - trying to justify his request for the authority to use taxpayer funds to backstop the mortgage finance companies Fannie Mae and Freddie Mac - advised Congress that "if you have a bazooka in your pocket and people know it, you probably won't have to use it."

Two months later, alas, the debt markets were in disarray again, prompting Paulson to drop the military imagery and take the companies into government conservatorship.

It will be days or weeks before the mortgage legislation wends its way through Congress, meaning that a final verdict on the project is still a ways off. In the meantime, Steil believes there is one surefire bull market: in lobbying Congress over the final shape of the bailout legislation.

"The amount to be spent in lobbying will be huge," he said. "It's difficult to see where this all ends."