After pitting his corporate offspring against each other, Sumner Redstone faces a fuzzy reception for a new venture. 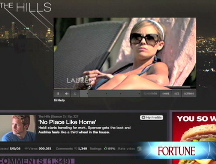 (Fortune Magazine) -- In April, Paramount Pictures walked away from a deal to air its movies on pay-TV channel Showtime. Instead, it announced a plan to start up a rival channel with two other longtime Showtime suppliers, MGM and Lionsgate. To the uninitiated, that might have appeared a nugget of passing interest, as in: Great, another movie channel ... I guess.

But to those who trade in Hollywood intrigue - and who revel in schadenfreude toward media billionaire Sumner Redstone - it was further evidence of how the old man may have lost it and a sign of fighting within his vast media empire. After all, Paramount is owned by Viacom (VIA), and Showtime is owned by CBS (CBS, Fortune 500), and both are controlled by Redstone - who had orchestrated a split of Viacom into the two publicly traded companies at the beginning of 2006. Showtime apparently wanted to pay a lot less for Paramount flicks than it had previously - and thus began the spectacle of Redstone's corporate children fighting over money. Kids these days!

Lately the unnamed Paramount-MGM-Lionsgate venture has been drawing fresh chatter because some of the folks who work for big cable and satellite providers are wondering whether it will ever see the light of day. "They're not getting anywhere, and we haven't heard from them in a long time," said a top executive with one of the big distributors - a comment echoed by others in the business whom I spoke to.

Viacom officials say that's poppycock - the project, they say, is alive and any bad buzz is the usual posturing that goes on whenever a new channel debuts. The cable and satellite gang do have a strong desire to drive down the price of new channels. Plus, the Viacom project isn't supposed to launch until the latter part of next year. Still, as another cable industry veteran put it to me, "If you don't have a single distribution deal within six months of announcing, you're dead."

Whatever happens, the new movie channel is already a small tale that speaks volumes about what is going on not just in Redstonia but in Hollywood broadly, as its biggest players split, spin off, and recombine themselves in a struggle to find new ways to grow in the Digital Age. The way people consume movies is expanding and changing fast. Channels like Showtime and rival HBO (which, like Fortune, is owned by Time Warner (TWX, Fortune 500)), have arguably become better known for original series like Weeds and Curb Your Enthusiasm than they have for box-office blockbusters.

If the new movie channel falters, it could prove to be another unneeded headache for Paramount, which, insiders say, used to count on $5 million to $15 million for each of its films from Showtime. (The studio just went through the high-profile and somewhat embarrassing departure of DreamWorks from its fold.)

Mark Greenberg, the former Showtime executive now in charge of the Viacom-led project, said he might pursue a different business model from existing pay- TV networks. Whereas those channels are optional - that is, consumers choose to pay an extra fee, which is split between channel and distributor - Greenberg is pitching his channel as a digital entity that would have a much wider audience than the 30% to 40% of cable or satellite homes that pay channels typically attract. Greenberg also argues that the venture will have lots of compelling content at its disposal - Paramount hits like Iron Man, for instance, plus a passel of HD-remastered James Bond movies. And the operation will be free to offer subscribers access to its trove via the web and other digital outlets. "This is a once-in-a-lifetime opportunity," Greenberg says.

And yet it's not clear that anyone but Viacom and its new partners are feeling the excitement. If there is no deal with all the cable and satellite distributors, a fallback position for the new channel could be to sign an exclusive deal with one distributor - perhaps one of the new telco broadband video services, such as Verizon FiOS - and hope cable or satellite subscribers switch over en masse. If that happens, and Showtime holds its own, Redstone could depict this project as precisely the kind of value he hoped to create when he split his company in two.

His investors, meanwhile, might just do exactly what they've been doing for a while: yawn and change the channel.

Google not yet ready for prime time
In living color - and three dimensions!