The new most powerful man in finance, Bank of America CEO Ken Lewis, talks about the future of Wall Street and the economy. 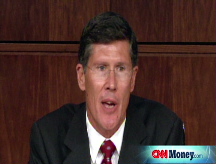 More Videos
Lewis: We didn't want to be left out 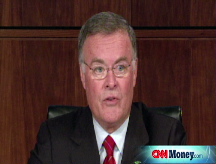 (Fortune Magazine) -- To reach the new power center of Wall Street, hop a cab to La Guardia, board a flight for Charlotte, stride into a beige granite tower, go past the allegorical murals of the common man at work, then take the elevator to the 58th floor. You're at the headquarters of Bank of America, and you're about to enter the glass-framed suite of CEO Ken Lewis.

A world away from Manhattan money and its ethos - which, by the way, he detests - Lewis presides over a company that represents the future of finance. BofA's deal to buy Merrill Lynch (MER, Fortune 500) for $50 billion sets the template. Sure, rival institutions - notably J.P. Morgan Chase (JPM, Fortune 500) and Citigroup (C, Fortune 500) - combine investment and consumer banking. But the Bank of America/Merrill union creates a colossus of unprecedented size and scope.

It isn't clear whether the deal will enrich shareholders or how the market chaos will play out. But it's certain that Lewis is realizing the epic vision he has long dreamed of. "I approached [former Merrill CEO] Stan O'Neal a few years ago, but he showed no interest," says Lewis. Now the crisis brings the missing piece within his grasp: "We've fulfilled the strategic picture we sketched on blank sheets of paper."

The Merrill merger will make BofA (BAC, Fortune 500) just what Lewis wants it to be, the dominant player almost across the board in financial services. By capturing Merrill's "thundering herd" of 16,700 financial advisors, BofA becomes the world's biggest brokerage, with $2.5 trillion in client assets. If both firms keep their current market shares, BofA will rise from the second tier in investment banking to first place in global debt and equity underwriting. After years of acquisitions that created the first true nationwide banking brand, BofA already ranks first in credit cards, retail banking (with 6,000-plus branches), and mortgages via its recent acquisition of Countrywide. BofA is now a full-blown financial supermarket, a business model that is succeeding at J.P. Morgan under CEO Jamie Dimon but failing at Citigroup.

Lewis, who's 61, clearly thinks he has an advantage over those two because he's bigger - in more businesses, in more places. Seated in his sun-splashed office adorned with American Impressionist and Hudson River school paintings, he's describing the future of finance in terms perhaps best characterized as cautious exultation. He predicts an end to profligate pay and a witheringly tough market ahead that will leave a few giant champions and a field of casualties. That's not all bad news as far as Lewis is concerned. After all, he hates Wall Street's inflated pay; the market crisis brought him Merrill Lynch; and any decline in the rest of the investment banks out there is good for him. "We'll take a lot of their business," he says.

“We'll see big write-downs all the way through next year that won't abate until 2010.”
Ken Lewis

Lewis is under no illusion that the next few years will be easy. "The Golden Age for financial services is over," he tells Fortune. "It will never be the same, not in my career. Revenues will be far harder to get in the future." For Lewis the biggest problem is the plight of the consumer. He sees the credit pie shrinking as Americans, stretched by high mortgage payments and gas prices, their jobs frequently in jeopardy, recognize that they can't afford the debt they already have, let alone add more. "The consumer is deleveraging, just like many of the banks," says Lewis.

The banks, in his view, are just as weak as the consumer. As a result, they'll be hard-pressed even to satisfy the demand for mortgage, car, and credit card loans. "We'll see big write-downs all the way through next year that won't abate until 2010," says Lewis. "Over that period a number of big banks won't have enough capital to make a lot of loans." Lewis sees a rare opportunity to grab market share by extending credit while his competitors languish on the sidelines.

Lewis says his edge isn't just a plentiful pool of capital. He also claims that he'll soon enjoy a big advantage over the best soon-to-be-ex-investment banks in the business, as well as the only ones that remain independent, Goldman Sachs (GS, Fortune 500) and Morgan Stanley (MS, Fortune 500). Both firms are turning into bank holding companies. That will allow them to fund their loans and investments with stable deposits rather than short-term debt that can evaporate in a financial crisis. But it will also force them to radically shrink their balance sheets.

But Lewis believes that transformation will make them far less formidable forces in capital markets. Why? It's complicated, but here goes: Since Goldman and Morgan must shrink their balance sheets by reducing their towering leverage, they won't be able to offer the same financing options their corporate customers increasingly demand - that's because corporations that give Goldman and Morgan their underwriting business will expect the banks to extend revolving-credit facilities and bridge loans as part of the package. Says Lewis: "As bank holding companies, Morgan Stanley and Goldman will be forced to shrink their balance sheets when expanding your balance sheet is a key to getting corporate business. That will make them less competitive." How does Lewis feel about facing the two storied firms in battling for credit card customers and branch deposits? "We have something of a headstart," he says with a sly smile. "I'm not losing any sleep."

Even as the world moves Lewis's way, he still faces some obstacles. One is the issue of BofA's capital: With the bank's acquisitions of Countrywide and Merrill, even BofA's war chest has gotten a bit crimped. Unless the bank bolsters its equity, its regulatory capital-to-assets ratio will fall to around 7.4% after the Merrill deal, below Lewis's target of 8% to 8.5%. Lewis is pondering a radical solution: cutting BofA's almost $3 billion quarterly dividend, which amounts to $11.8 billion annually. "For the first time, the dividend is on the table," says Lewis. "The Merrill deal is a factor, along with everything that's happening in the economy. The need to build capital is more apparent and intense."

Shrinking the dividend, however, will disappoint investors who flocked to BofA stock because of its reliable, ever-rising payout. It also represents a retreat for Lewis, who until recently told investors that a cut was unlikely. "A lot of investors will be upset, and the stock price may go down if he makes the cut," says Meredith Whitney of Oppenheimer & Co.

The other big issue for BofA is whether it overpaid for Merrill. Lewis calls the deal "the strategic opportunity of a lifetime." But was it really such a bargain? BofA is paying an extremely high price in a market where assets are going for a song, though the deal could prove profitable in the long run. Until Friday, Sept. 12, Lewis was weighing the acquisition of Lehman Brothers, then on the verge of bankruptcy. Lehman had $85 billion in toxic real estate loans. "We figured that the $85 billion in troubled loans was at least $10 billion underwater," says Lewis. He calculated that the value of Lehman's good assets - its investment bank and asset-management arm - wasn't nearly enough to compensate for the potential $10 billion--plus loss on the mortgage assets. He wanted the government to take $65 billion to $70 billion of the most dangerous securities on its books. Over the phone on Friday evening, Lewis told Treasury Secretary Hank Paulson he couldn't buy Lehman without government assistance. When Paulson said he couldn't help, Lewis walked.

On Saturday morning, Sept. 13, Merrill CEO John Thain phoned Lewis in Charlotte to propose a merger, and the two made the giant deal in 36 hours. The huge question is why Lewis paid $50 billion, or $29 a share, a 70% premium over Merrill's closing price on Friday. Over that weekend, with markets heading for a meltdown on Monday, Lehman's looming bankruptcy threatened to bring down Merrill as well. Indeed, Lehman failed on Monday morning; the following week Barclays got a sweet deal buying its North American investment bank and headquarters for $1.7 billion.

So why didn't Lewis wait until Monday, when Merrill might have faced bankruptcy or, even if it survived, been forced to settle for a fire-sale price? Lewis explains that if Merrill went bankrupt, BofA would have had a harder time buying the business it most coveted, Merrill's brokerage franchise. "In a bankruptcy we'd have to bid against other potential buyers, and that asset would have been worth a lot on its own," says Lewis. And if Merrill avoided bankruptcy, Lewis feared that Thain would make another deal. "Both Goldman Sachs and Morgan Stanley were in the mix," says Lewis. So Lewis eliminated his chance of losing Merrill by acting in a flash. He won't talk much about the negotiations with Thain. "He started at a higher price, and I started at a lower price," he says simply.

It may be true that Lewis would have lost Merrill had he waited. But he has no regrets about the price. "Merrill is worth significantly more than $50 billion," he says. He is promising shareholders that he'll cut costs by a staggering $7 billion before taxes. Unattainable? Not if you consider the extraordinary cost savings Lewis wrung from the Countrywide merger, and the Fleet acquisition in 2004. Lewis is especially anxious to attack Merrill's pay scales. "Merrill was paying typical Wall Street pay," he says. "Their staff people were making a lot more than our staff people. That won't last. We intend to pay market instead."

And if his new employees aren't happy about the pay - or any of Lewis's grand transformations, for that matter - they probably shouldn't waste their time griping to the CEO. Lewis isn't known for his tolerance of complaint. A few years ago one of his top lieutenants wrote the boss a long memo complaining that he'd been undermined by another executive. A few days later he found the memo on his desk. At the top, Lewis had scribbled three words: "Get over it."