It's an unnerving time for commodities-stock investors. But it could also be an opportunity. 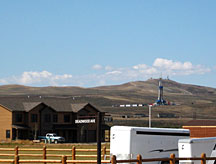 NEW YORK (Fortune) -- Commodities-stock investors basically have two options right now. Either cut your losses and head for the sidelines - not an irrational choice when commodities prices can't seem to find a floor. Or, if you can stomach the possibility of more losses, double down in the hopes of making home-run gains down the road.

Risk-takers, this column is for you.

But first, let me start with an admission. As someone who writes frequently about commodities stocks, I've been wrong this year a lot. I have a lot of company of course, but suffice it to say that many stocks I thought were cheap earlier in 2008 have become much, much cheaper in the ensuing months. A case in point is Valero (VLO, Fortune 500), which I believed represented a real buying opportunity in August at $32 a share (down from its all-time high of $77 in July 2007), when its price-earnings ratio was 7. Today, Valero trades at $17 and has a P/E of 4 (based on estimated earnings for this year). Perhaps because I'd never before seen a 4 P/E on such a great business - I was five years old in 1974, the bear market most comparable to this one - I didn't have a sense for how bad things could get.

The point is that any stock you buy now should be a long-term investment. Fear pervades the equity market, which makes it hard for investors to think rationally about valuation. You can't assume rationality will make a quick return. I once heard Peter Lynch, the legendary Fidelity fund manager, say that one of the biggest mistakes money managers make is betting that a stock cannot go any lower. As Lynch pointed out, a $7 stock is just as capable of dropping 50% as a $70 one.

That being said, extraordinary values do seem to abound right now, and if I wasn't so chastened by my past mistakes, I'd be inclined to call this the greatest buying opportunity most commodity-stock investors will see in their lifetimes. My worry is that I'll be saying the same thing six months from now. Nevertheless, supply-and-demand fundamentals still point to much higher prices, long term, for everything from oil to corn. Here are two stocks that seem poised for a huge rebound. Just don't ask me exactly when.

The nation's largest natural gas producer, Chesapeake (CHK, Fortune 500) has been hammered by concerns about a cash crunch. Its stock has fallen from $69 to $17 since July. Though Chesapeake does have $1.5 billion in cash on its books, the company's aggressive drilling plans mean it will have to sell assets, cut back on capital spending, or get more financing (tough to do in this market, though on Thursday Chesapeake did secure a new $460 million line of bank credit ) to stay cash flow positive.

One way to ratchet down the risk is by buying Chesapeake's preferred shares - currently boasting a dividend yield of 10% - instead of the common shares. But the greater upside is with the common. J.P. Morgan energy analyst Joseph Allman thinks Chesapeake is worth $53 a share, based on the underlying value of its massive oil-and-gas reserves.

Named after its key product, Canada-based Potash Corp. (POT) is the world's largest producer of the fertilizer potash and a major producer of phosphate- and nitrogen-based fertilizers as well. Based on POT's sorry stock price - its shares have sunk from $240 to $69 since June - you'd think that fertilizer prices had cratered too. But they haven't. The price of potash, for instance, remains at record levels: about $1,000 a metric ton, triple where it was in early 2007.

Even after paring his estimates to account for the global recession, fertilizer analyst Keith Carpenter of Canaccord Adams still expects Potash Corp. to earn $11.75 a share in 2008 (triple what it earned last year) and $21.76 in 2009. Based on his '09 earnings estimate, the stock has a P/E of just 3.