Wall Street thought it had risk all figured out. But the very system the banks created to protect themselves are at the heart of the financial meltdown.

The end of small government 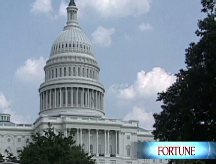 (Fortune Magazine) -- If you visit Lehman Brothers' website today, more than a month after the investment bank's plunge into bankruptcy, you can still find the following words: "The effective management of risk is one of the core strengths that has made Lehman Brothers so successful."

That boast now reads like a bitterly ironic epitaph. But there was a time not so long ago when such a statement was widely believed to be true - not just for Lehman, but for Wall Street in general. News accounts in 2007, for example, routinely described Bear Stearns as being "known for its tough risk controls."

Now, of course, both Bear and Lehman have disappeared as independent entities, Wall Street has been brought to its knees, and American taxpayers are on the hook for outlandish sums to clean up the mess.

But all the drama and chaos of recent months obscures the most fundamental cause of the entire financial crisis: a basic misunderstanding of risk (abetted by heavy borrowing). The paradox is that Wall Street's strategy to avoid excessive risk - by dispersing it - ended up exacerbating precisely the problem it was designed to prevent.

"Risk" is the financial world's term for handicapping the probability that a desired outcome will occur. If you check the weather in the morning and there's a 0% chance of rain, you don't take an umbrella. If there's a 100% chance of rain, you grab it. Anywhere in between - and the vast majority of decisions are in between - it's a judgment call. All is well as long as the forecasters get the percentages right.

When it came to subprime mortgages, as we all now know, they didn't. The weather people predicted, in effect, a 99% chance of sunny skies, leaving the world umbrella-less and soaked to the skin when the storm came.

To understand how Wall Street got it so wrong, it's necessary to revisit its history with the mortgage business. Long before investment banks got involved, loans to buy homes had begun passing out of the It's a Wonderful Life model, in which your friendly neighborhood banker (Jimmy Stewart!) issued loans, and his savings and loan kept them on its books. The banks took all the risk, but that created an incentive to know the borrower and give out money only to people who could actually pay it back.

Beginning in the 1970s, government-sponsored entities like Fannie Mae (FNM, Fortune 500) began buying up huge quantities of loans and packaging them into "mortgage-backed securities" (MBS). These bonds removed hazard from the banks and shifted it to investors and the federal government, which implicitly guaranteed the investments. Home loans were still fairly standard, so it was easy to compute the chances that borrowers as a group would fail to pay.

Investment banks are always on the prowl for new products, and they got involved in MBS beginning in the 1980s. But by the 1990s, mortgages were becoming more complex and unpredictable. There was the introduction of balloon mortgages (where you paid the interest and some principal during the life of the loan, but had to pay the rest at the end) as well as adjustable- and floating-rate mortgages (where monthly payments could fluctuate depending on interest rates).