Bruce Wasserstein predicts billions of dollars worth of additional losses for the nation's banks if the economy continues to slide. 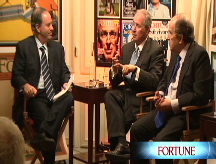 NEW YORK (Fortune) -- The reason the nation's largest banks aren't willing to lend - even after taking in truckloads of government aid - is because they face billions of dollars in fresh losses, Lazard (LAZ) chief executive Bruce Wasserstein said Thursday.

It's not just mortgage-related investments that will continue to hobble the nation's banking industry, said Wasserstein in response to questions from Fortune managing editor Andy Serwer at Fortune's "Wall Street's New Deal" symposium.

Problems, continued Wasserstein, will soon appear in bonds backed by credit card debt, commercial real estate loans and other assets if the economy continues to falter and borrowers are unable to make payments on their debt.

Wasserstein's warning comes as the Treasury Department injects as much as $250 billion into the country's banks as part of the TARP Capital Purchase program, which was enacted to stabilize the nation's shaky financial system.

But banks are unwilling to part with their government cash, the star investment banker said, because they are "barely beginning to understand the depths of their problems."

Wasserstein and Schwarzman talked about the future of banking regulation and the Lehman Brothers bankruptcy. Schwarzman said that, in hindsight, he thinks that the government should have stepped in and saved Lehman, whose September collapse triggered a market panic and a sweeping plan by the government to bail out the nation's banks.

In addition to $250 billion in loans, the TARP plan allows the government to deploy as much as $450 billion more to buy potentially toxic assets from banks. While the program was designed to help move bad assets off the books of financial firms, Wasserstein estimates that the amount of troubled assets could far exceed the amount of money that buyers can provide.

Banks, he said, have also been reluctant to sell assets because the prices offered would be far below what they paid for them. This would force banks to take additional writedowns.

Instead, banks are holding onto the some of these troubled assets in the hopes that their values rebound. But Wasserstein warned that some asset values may never bounce back. Accounting today, he said, "has become a creative exercise in creative fiction" because nobody knows the true value of many securities.

Adding to bank woes is the prospect of a wave of credit card defaults. Although that hasn't happened yet, further evidence emerged Thursday of a looming U.S. recession that could see an increase in payment defaults: GDP growth in the third quarter fell at an annual rate of 0.3% - its biggest decline in five years - and consumption for the third quarter ended in September posted its sharpest quarterly drop since 1980.