For GM, bad news may be good

A President Obama and a Democratic Congress may be unable to resist bailing out the ailing automaker. 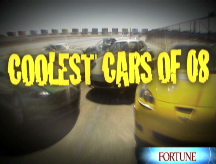 NEW YORK (Fortune) -- With an optimism that verged on foolishness, the African hunter stood his ground, aimed his rifle at the charging elephant and declared, "Now I have you just where I want you."

In that way, the stampede of bad news bearing down on General Motors may be just what the automaker wants as it struggles to stay in business. Perhaps Charles Dickens and P.T. Barnum best expressed the sentiment: every cloud has a silver lining.

The Treasury Department was reported Monday to have turned down a request for up to $10 billion in additional financial aid to help GM finance a hookup with Chrysler.

GM has apparently been arguing that it needs to merge with Chrysler to gain additional economies of scale and get access to Chrysler's cash. It needed the government money to stay liquid until the deal closed.

But Treasury decided that, at least for now, its $700 billion rescue program only applies to financial institutions, not metal benders like GM.

On Monday afternoon, GM (GM, Fortune 500) confessed to its worst month in memory. Car and truck sales in October plunged an almost unimaginable 45% from a year earlier.

The gloom emanating from the GM conference call was palpable, with market analyst Mike DiGiovanni calling the situation "very dire," "horrific," and something "we can't sustain."

GM blamed the collapse on plummeting consumer confidence in the wake of the credit crisis, and the inability of its finance arm, GMAC, to underwrite loans to any but the most financially respectable customers.

Dems may be friendlier to Detroit

So where's the silver lining? How do these events play into GM's hands?

On Tuesday, barring an unforeseen event, a Democrat will be elected president, along with a Democratic Congress. Both are likely to be more receptive to a GM bailout than a Republican president-elect and a lame-duck administration. And GM's abysmal sales of late - worse than Ford's or Chrysler's and almost any foreign automaker - make it appear to be a true charity case.

Like President Franklin D. Roosevelt in 1932, the new president will want to make a big splash to restore confidence and create a sense of forward progress. What could be more dramatic than coming up with a rescue plan for the fading icon of American industry?

Then there's the influence of the United Auto Workers, a traditional pillar of Democratic politics. While the union doesn't have the size or the muscle it once did, it will certainly be able to make its voice - and its interests - felt.

One of the conditions of a government deal, however, ought to be that GM keep its hands off Chrysler.

As consultant Grant Thornton note in a new report, outside analysts have been nearly unanimous that a merger is "not a good idea given GM's own restructuring efforts, overlap of product lines, too many brands, too many dealerships, UAW resistance, [and]execution risks." Against that array of obstacles, the purported benefits of cost and technology sharing, and Chrysler's bargain price, seem trivial.

Of course, assessing GM's improved prospects for obtaining government aid under a new administration begs the question of whether the car maker actually deserves help.

It takes some stretch of the imagination to argue that a company which has been destroying capital for decades should be given more money to fritter away. Or that after failed turnarounds dating back to the 1980s, GM should get public financing to attempt yet another one. Or even, finally, that a management team which has rung up nearly $70 billion in losses over the last three and a half years should be allowed to remain in place.

If the next president, whether Obama or McCain, really wants to make a statement, he would allow GM to file for bankruptcy. Ford (F, Fortune 500) and Chrysler would quickly follow so that they, too, could share in the cost savings and leaner operating profile that would result.

No one company would be forced to suffer undue public shame, and they could all emerge as stronger and potentially profitable entities. Tired old brands, and with them tired old dealers, would disappear, so that the companies' remaining resources could be focused on those products and dealers with the greatest strength and staying power.

Bankruptcy appears to have worked for the airlines. Why not try it for the auto companies too?