Why it's (finally) time to buy stocks

Investor Daily: After being overpriced for more than a decade, equities now trade at sensible-but not bargain-prices. 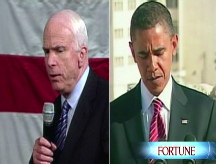 NEW YORK (Fortune) -- You didn't hear this uttered very often, but over the past decade and a half, through bull and bear market alike, the value proposition for stocks could be stated succinctly: There's nothing to buy.

The fact is that equities were over-valued for years, making them vulnerable to the kind of brutal, sudden sell-off we've just witnessed. But now that the S&P has declined 40% in 12 months, the question is whether equities are at long last a bargain. The answer is a qualified yes: Stocks aren't exactly cheap, but for the first time in years you can expect decent returns, provided you're patient.

"If you buy now and wake up in 10 years, you'll probably get a return around the historic average," said Yale economist Robert Shiller. In the near term, however, Shiller - who correctly predicted the implosion of the stock-market and real-estate bubbles - is more cautious. "There is a substantial risk that with all this economic turmoil, stocks will fall far lower," he warned.

But make no mistake, stocks are now at levels where buying makes sense.

The best measure of stock valuation is Shiller's own index of price-earnings multiples. Shiller uses a 10-year average of inflation-adjusted earnings to calculate an adjusted P/E. The advantage to the Shiller method is that it smoothes out the peaks and valleys in profits.

Example: In the 2003 to 2006 period, earnings soared to historic heights, jumping from a normal 9% of gross domestic product to an extraordinary 12%. The profit bubble made P/Es look artificially low, handing the stock jockeys a logical-sounding reason to claim that equities were a buy, when in fact they were overpriced. Both the "P" and the "E" were in a bubble - the "P" even more than the "E." When the "E" collapsed in the face of the current downturn, the outrageous valuations were rudely exposed.

In the bear market that followed, P/Es dropped - but only into the low-20s. Then they took off again, averaging 25 to 28 from 2003 to the beginning of this year. Now they're at 15.7, not far from their pre-bubble average. That decline is tonic for investors. Research by economist and hedge fund manager Cliff Asness shows that buying in at a high Shiller P/E usually leads to poor returns, while grabbing stocks at a low Shiller P/E is a reliable route to riches.

From today's levels, what can we expect? Stocks' future return is closely related to the inverse of the P/E, also known as the earnings yield. So at a P/E of less than 16, investors should obtain real, or inflation-adjusted, gains of around 6.5%, which is about what Asness found in his research. Add 2.5 points for inflation, and the nominal return comes to a respectable 9%. That's about a point below stocks' long-run return, but it's far better than anything investors could expect for a decade and a half.

The rub is that getting even that 9% return won't be easy. Assuming no escalation of P/Es, stock returns come from a combination of earnings growth and dividend income. Earnings per share grow only at about 2% a year after inflation. (Total earnings grow faster than that, but new issues of stock dilute that growth.) So add in our 2.5% inflation rate to 2% real growth, and you still need a dividend yield of 4.5% to get to that 9% goal. The yield on the S&P 500 is now around 3.3%, versus around 2% earlier this decade. That's better, but not enough.

You'll also want to avoid most tech issues. Companies such as Oracle, Google (GOOG, Fortune 500), Symantec, and Research in Motion (RIMM) pay no dividends at all, and sell at pricey multiples between 16 and 23.

Finally, remember this: Shiller points out that stocks were cheap in the early 1930s, and investors who bought then eventually made good money. But it took them many years to get there. So if you buy now, stick with strong dividend-paying stocks, and fasten your seatbelts. It will be a bumpy ride.