The Japanese electronics giant acquired software maker Gracenote to help integrate its TVs, PS3s, and music into the web. 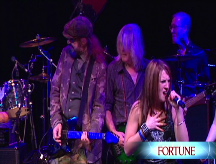 In the midst of the insanity, it occurred to Roberts that it would be cool to help these fans instantly share the content they were creating. That idea turned into one of many intriguing projects underway at Gracenote, the small software firm with huge ambitions that Sony (SNE) purchased in June.

The Japanese consumer-electronics and entertainment giant, which paid $260 million for the company, is betting that Gracenote will become the major player in a field called metadata.

Ever dropped a CD into your laptop, and all the album information - title, song names, and so forth - pops up automatically?

That happens thanks to a Gracenote database of 90 million recorded songs. The Emeryville, Calif., company also has a data trove of 300,000 DVDs, nearly a million TV shows, and the lyrics to 550,000 songs, many of which its own "musicologists" around the world have transcribed. (Yes, Gracenote has secured the rights.)

Sony hopes to use Gracenote's software to streamline the delivery of its movies, TV shows, and music over the Internet and to improve the ability of its phones, portable music players, PS3 game consoles, and TVs to receive digital content. Gracenote, a profitable, ten-year-old company, also licenses its product to Apple (AAPL, Fortune 500), Samsung, and Yahoo (YHOO, Fortune 500).

The firm has also collected audio fingerprints for 23 million music tracks. This database makes possible the application that lets you use a Sony Ericsson phone to identify the titles of songs playing at bars and win bets with your drinking buddies.

Gracenote faces steep competition in this field. Shazam, a London startup, claims to be the world's leader in what's called mobile music "discovery" software. So far 20 million customers have used Shazam software on iPhones and other devices to identify music tracks, buy them, store them on their cell phones, and share them with friends.

Roberts argues that Gracenote offers much more than Shazam. His company provides lyrics, recommends music, and is moving into new markets. Own a Ford (F, Fortune 500) with the technology that allows you to select songs with a voice command while driving? Gracenote developed that too.

Another challenge is for Gracenote to work with Sony without losing its old customers who compete directly with its new owner. To that end, Sony is allowing Gracenote to operate as an independent company within its U.S. division. Gracenote is busily constructing firewalls between employees who work on Sony projects and those for, say, Warner Music (WMG), a rival of Sony's music company, SonyBMG.

How does Warner feel about this arrangement? Michael Nash, Warner Music's chief digital strategist, thinks his company will benefit because Gracenote will only grow stronger under its new owner. "We're not threatened," he says. "We're encouraged by it." It looks as if Gracenote is living up to its name.

What MySpace Music means for Amazon

The trouble with Zunes
Related Articles