Oil speculation: It's back

There's more of it today than there ever was this summer. And this time around, it really is making oil more expensive. 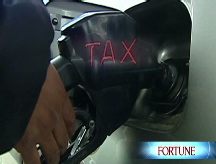 NEW YORK (Fortune) -- With oil now at $50 a barrel, you no longer hear Congress complaining about oil speculators. The irony is there's probably more real speculation going on today than there ever was back in June and July.

I'm talking about the type of speculation that involves hoarding oil today so it can be sold for more down the road. Today's speculators are actually buying oil. They're not merely flipping futures contracts without taking delivery - which is what hedge funds and commodities index funds were doing when they were in the crosshairs of Congress this summer. As I've argued before, investors who trade futures but never take delivery of actual oil can't have a material impact on oil prices because their trading affects neither supply nor demand.

What's different now is the structure of the futures market, which is giving big investors an incentive to buy and hold huge sums of crude. Specifically, the November 2009 price of oil is considerably higher ($12 a barrel higher, to be precise) than the spot price - a scenario futures traders call a "contango" market. (The opposite scenario - spot prices higher than futures prices - is known as "backwardation.")

"The steepening of the contango has opened up carry-trade arbitrage opportunities that are slow to be closed due to constrained credit conditions," Goldman Sachs wrote in a recent research report. Translation: this is a great time for investors to be hoarding oil.

Today's market is giving Goldman clients and other well-heeled investors an opportunity to buy oil in the spot market for $50 a barrel, sell it forward in the futures market for $62, and then pocket the $12-a-barrel difference, less storage costs.

This type of oil investing was quite popular in 2005 and 2006 when, like today, the price of oil one year out was much higher than the spot price. Back then, contango trades were so popular that one of Morgan Stanley's top energy traders, Olav Refvik, leased so much oil storage that he earned the nickname "the King of New York Harbor."

There's no question the investing strategies pursued by Refvik and others were pushing up oil prices. By putting large sums of oil into storage, they reduced the supply available to consumers. By 2007, however, the gap between spot prices and futures vanished, and so did the opportunity to profit from that difference. And the amount of oil held in inventory began to fall.

Nevertheless, Congress needed a scapegoat for rising oil prices and an easy target proved to be hedge funds and other investors dabbling in oil futures. But these pseudo-speculators were simply making a bet on the direction of prices; they weren't driving them. Their gains (or losses) came out of the hides of the investors or airlines or oil companies on the other sides of their trades, not the oil-consuming public. Moreover, a lot of commodities hedge funds were actually making the wrong bets: According to Merrill Lynch, the average commodities hedge fund had a negative trailing 12-month return through June.

Unlike futures flippers, contango traders really do impact oil prices, yet they're getting a free pass. According to the U.S. Energy Information Agency, domestic oil inventories have risen 9% since oil prices peaked in early July. While some of that is attributable to the weak economy and slack energy demand, gasoline consumption declined only 5% over the same period and gasoline inventories have risen only 4%. (If you're wondering why contango traders would target crude oil but not gasoline, vaporization issues make gasoline harder to store.)

Demand for oil storage is so keen today that some big investors who can't secure storage on land have resorted to leasing supertankers and using them as floating oil tanks. For example, the U.S. oil trading firm Koch Supply & Trading recently leased the 2-million-barrel-capacity Dubai Titan, a Koch spokesperson confirms, the third supertanker Koch has leased this year.

It's hard to quantify exactly much lower gas prices might be were it not for the current speculation. In the United States alone, crude oil inventories have increased by 27 million barrels since early July, the equivalent of about 200,000 barrels a day being pulled off the market. Based on the estimates I've seen, a 200,000 barrel-a-day decrease in supply could raise gasoline prices by anywhere from 20 to 40 cents a gallon.

For the average consumer, that's real money. But I bet you a barrel or two that actual oil investors like Koch never get targeted by Congress the same way the hedge funds and index funds did this past summer.

After all, who needs a scapegoat when gas is $1.90 a gallon?