What about the free market?

At the Fortune 500 Forum Monday, Hank Paulson revealed how the financial crisis has changed his thinking about free markets. 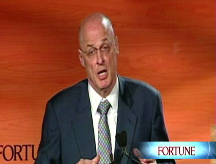 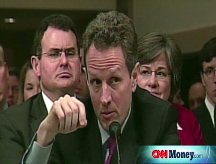 WASHINGTON (Fortune) -- There's an elephant in the room every time Treasury Secretary Henry Paulson steps to a podium to recount the serial emergency actions he and other top officials have taken (and, as revealed Monday, will continue to take) to prop up, bail out, jerry-rig, bolster, stabilize, or otherwise rescue capitalists and property owners.

The events of the past six months are forcing Paulson (and everyone else) to do some hard, and agonizing, thinking about the faith we once had in the free market's ability to self-correct without sinking the economy. The end result will be a new and strange footprint on American politics, as a Bush administration that ditched its free-market dogma gives way to an Obama administration that ditches its leftist supporters to save capitalism.

Yesterday, Bush's Treasury secretary opened a telling window onto his thinking about that vexing subject - and in the process revealed just how much the financial crisis is already merging the economic voices of the two major parties. At a Fortune 500 Forum in Washington, Paulson was asked to reflect on lessons learned over these past tumultuous months, and to define what constitutes appropriate government intervention in the markets. "Are there some hard lines that you think about that should not be crossed?" one executive asked.

The former Goldman Sachs (GS, Fortune 500) CEO would have issued a firm yes just a year ago. He's a lot less sure now. "Some of the things I've been part of have been very, very objectionable decisions," Paulson averred, "but they haven't been difficult decisions" because the alternative would have been much worse. He added: "I look at some of the things that I have done as being essential to preserve the free-market system."

Then Paulson's answer took an especially interesting turn. "Here's the way I think about regulation and the free market system," he said. "We need to get to a place in this country where no institution is too big or too interconnected to fail...because regulation alone is never going to solve the problem. There's no regulator that's going to be so good they're going to be able to deal with or ferret out all the problems. So it takes balance between the right regulatory system and market discipline."

Who does that sound like? One of President-elect Barack Obama's most liberal advisers, former Clinton Labor Secretary Robert Reich, recently wrote this on his blog: "Pardon me for asking, but if a company is too big to fail, maybe - just maybe - it's too big, period."

This emerging philosophical common ground extends beyond labor-liberal Reich and Wall Street free-marketer Paulson. During the campaign, candidate Obama marched a cautious lock-step behind Paulson, from Bear Stearns and AIG (AIG, Fortune 500) to Fannie Mae (FNM, Fortune 500) and Freddie Mac (FRE, Fortune 500) to the $700 billion plea to Congress for a system-wide bailout. Paulson, meanwhile, is sounding an awful lot like Obama - or is it the other way around? - with his repeated calls for a free market that is in "balance." And Obama is looking a lot like Paulson in his recruitment of Paulson protégé Timothy Geithner as his Treasury Secretary.

Paulson's litany of prescriptions to update the nation's regulatory structure for the 21st century, which he repeated yesterday, could have been lifted from Obama's speech last spring at New York's Cooper Union: a Federal Reserve system empowered to monitor for system-wide risk, a federal check on state mortgage regulators, charters for hedge funds, expansion of regulation to cover complicated instruments like credit default swaps, more checks on rating agencies.

"We need a full sweep of authority to deal with nonbank institutions," Paulson said, "so we can have an orderly wind-down without threatening the system." He added that "much more needs to be done in really understanding the global imbalances and the huge flows of capital that help contribute to this."

None of which Obama would disagree with. So this begs the question: Has the age-old political argument between state-friendly liberals and free-market conservatives lost its juice? Is there no room in the center of American politics for free-market purists, just as there's been no room since the 1970s for leftist ideologues who question the free market?

That's not a question Paulson is going to entertain right now. He says the focus needs to be on "recovery and repair" and that only when the financial crisis is in the rear-view mirror can we redraw firm lines between an unfettered market and an interventionist government.

"It's hard to design the right prescription until you've worked your way through the problem...[and] make sure you understand the full extent of the problem and all the causes," said the Treasury secretary.

Then he directly addressed the elephant in the room. "This is not about the belief in markets. Markets are the only way, and every other system has been discredited. What we have to do now is fight to make this system work the way it needs to work."