How long will the recession last?

Longer than past downturns, and Wall Street's meltdown will slow the recovery. 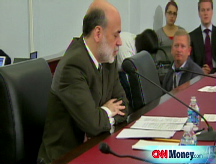 NEW YORK (Fortune) -- Well, now it's official: we're in a recession. And we know when it began: December 2007, according to the official arbiter of business cycles, the National Bureau of Economic Research (NBER), which made the announcement Monday. So now the question is: when will it end, and how deep will it get?

There are good reasons to be worried about both of these measurements, as the headwinds facing the economy are powerful indeed. But it's best to resist the temptation to give in to predictions of unconditional gloom and take a cool-headed look at how this recession compares so far to the many other downturns we've survived.

On the likely depth of the recession, it has been often said that this may be the most severe recession "in decades." This statement is almost certainly true but not particularly informative, as the two most recent recessions, in 1990-91 and 2001, turned out to be famously mild and short-lived by historical standards. So the real question remains: "the deepest recession" in exactly how many decades?

The most intuitive, and legitimate, reference is the 1981-82 recession, which lasted a longer-than-average 16 months and led to a peak of 10.8% in the unemployment rate - by all standards, a pretty serious affair. Still, it would take an extraordinary amount of additional severe damage to today's economy over a fairly long period to drive the unemployment rate from its current 6.5% to double-digit territory.

It is also important to remember that the 1981-82 recession was almost deliberately caused by sky-high interest rates, in the titanic fight of Fed chairman Paul Volcker to drive inflation out of the system. In contrast, the Fed's response now has been to pull out all the stops in the other direction, including the precipitous lowering of short-term interest rates and a barrage of other actions. A somewhat more plausible comparison to the current downturn is the 1973-75 recession, commonly attributed to the surge in oil prices at the time. That one lasted a longer-than-average 16 months and led to a 9% peak in the unemployment rate.

Direct comparisons to the Great Depression have become more common in recent weeks, given the collapse of the stock market and consumer spending. But those comparisons overlook many key facts. During the Great Depression, the unemployment rate surged to 25% and GDP contracted by 28% between 1930 and 1932, an unthinkable prospect in today's environment, thanks to a long list of underlying differences between then and now.

For example, the banking system collapsed in its entirety during the Great Depression and the absence of bank deposit insurance at the time caused catastrophic erosion to household wealth and consumption. Today, FDIC insurance (and its recently elevated limit to $250,000) provides a significant cushion; the response of economic policymakers is immeasurably faster and more aggressive now; and the coordinated actions among the major economies today to address the root causes of the current episode are both impressive and totally unprecedented.

How long will this one last? The prevailing view: probably through the middle of 2009. Two points to highlight here:

First, such a prediction is not based on any particularly refined insight that economic forecasters have into the current recessionary dynamic. After all, economic forecasting has a well-deserved reputation for being a notoriously imperfect art (most definitely not a science).

The predictions about this recession lasting through mid 2009 are mostly based on the following simple calculation: Until the NBER's announcement on Monday, the prevailing view was that the recession probably started at some point last summer and it was likely to be about average in length, by historical standards. Given that the average length of the ten recessions since World War II has been 10.4 months, with a range of 6 months in the 1980 recession to 16 months in the 1981-82 one, the natural "placeholder" time frame for the end of this recession would appear to be the middle of 2009.

However, the fact that the recession is now already 12 months old, and clearly not approaching its trough yet, raises the distinct prospect that it will exceed the length of the 1973-75 and 1981-82 recessions (both at 16 months), making it the longest since the Great Depression (43 months, from August 1929 to March 1933). The crowd fond of making comparisons to the Great Depression will be quick to declare some kind of victory on this one.

Second, the prediction that this recession may end around the middle of 2009 is not unreasonable, but even if accurate it disguises the critical question: What kind of a recovery is likely to follow? The answer is: probably a gradual one, unlike the more typical (but not universal) pattern of the economy coming out of most past recessions roaring ahead, propelled by pent-up consumer demand.

The healing process of a deeply wounded banking system, that has already led to nearly $1 trillion of write-downs, will act as a weight around the neck of any economic recovery in the latter part of 2009. Banks will likely continue the slow process of recapitalization and cleaning up the mountains of toxic assets on their balance sheets for a period longer than just the next few quarters.

That task will become even more challenging in the months ahead, as the recession itself will tend to generate an additional amount of toxic assets in their portfolios, impairing their ability to resume a more normal pace of lending. So, even though the economy may technically emerge from the recession in the second half of 2009, the recovery may initially become more of an issue of semantics rather than a robust turnaround in economic activity.

To be sure, this is a major recession and its downside risks in the midst of a highly volatile financial market environment shouldn't be underestimated. There are reasons, though, to believe that its severity and length will ultimately be contained by an unprecedented array of economic policy measures, some already in place, others in the pipeline.

Despite a series of false starts with some of those measures by the Treasury, the Fed's seemingly limitless reserve of innovative actions and the incoming administration's commitment to put in place a particularly aggressive fiscal stimulus package should gradually gain some traction that will help stabilize the economy within the next three quarters or so.