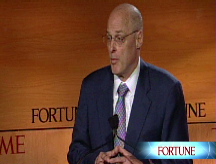 NEW YORK (Fortune) -- A billion dollars here, $7 trillion there: How long till Uncle Sam has to cry "uncle?"

For now, frightened investors worldwide continue to gobble up U.S. Treasury bonds, and they aren't much concerned about the impact of all the obligations the U.S. government is taking on to try and head off economic catastrophe.

But the government printing money, lending money to shaky corporations and guaranteeing debt that may never be repaid all could have troubling consequences in the not-too-distant future.

The No. 1 concern: Even if actions taken by the Federal Reserve and the U.S. Treasury succeeds at stabilizing the global financial system, and an economic recovery takes hold, a brutal inflationary spike will be right around the corner.

"Inflation is the 8,000-pound gorilla in the room," said Gary Hager, president of Integrated Wealth Management in New Jersey. "We're sitting in the room with the coffee cups vibrating."

In that environment, long-term interest rates would soar, the value of the U.S. dollar would plummet, policy makers would face a whole new set of challenges.

"Everyone is going to lose something," said Will Hepburn, president and chief investment officer of Hepburn Capital Management in Prescott, Ariz. "The winners will be those who end up losing the least."

Even those who have backed the blizzard of emergency spending on the grounds that it's necessary to prevent an economic catastrophe are worried about the size of the tab that will be left to taxpayers.

Hepburn gives federal officials "bonus points" for concocting innovative responses to the credit crunch. The ongoing collapse of U.S. stock market and real estate values, he said, has slashed U.S. household wealth by at least $10 trillion - and those paper losses could go much higher before the swoon ends.

So far, given the eye-popping sums being offered up by government officials, the markets have responded with surprising nonchalance. Yields on Treasury securities have tumbled to historic lows as investors fly to the safety and liquidity of U.S. government bond markets. The dollar has benefited from the move away from risky assets as well, trading at levels last seen earlier this decade.

Hepburn thinks the process of financial institutions and major investors unwinding massive bets may be further along than people believe. But while that could mean less volatility in the markets and a reduced risk of financial calamity, it could also whipsaw people who have moved their money out of stocks and into low-yielding assets like Treasury bonds.

"The capital preservation strategy will work till the recovery sets in," Hepburn said. "But we don't have the resources to pay off all these obligations - so the government's going to have to try to inflate it away."

An inflationary spike may seem unlikely, given that governments around the world are currently doing their best to head off the opposite threat - deflation, with falling price levels that would hamper economic growth by increasing real interest rates. The Bank of England and the European Central Bank slashed interest rates Thursday morning in a bid to bolster economic activity and prevent inflation from turning sharply negative in coming months.

But Hager notes that it was only four months ago that oil cost $100 a barrel more than its recent $47, which shows how quickly market dynamics can change.

What's more, he said, while people are still struggling to figure out the costs tied to starting up and overseeing the government bailouts, no one seems to have put much thought to an equally important endeavor - how the government withdraws the massive support it has offered the markets in the event its efforts start to bear fruit.

While efforts to thaw the credit markets are taking effect slowly, Tom Sowanick, chief investment officer at Clearbrook Financial, sees a risk that they could suddenly become much more effective, leading to a jump in prices and a selloff in the dollar.

"The economy's in a bit of a slingshot," said Sowanick. "We are looking at a high probability of inflation issues ahead."