Advice for the car czar

What not to do while overseeing the U.S. auto industry 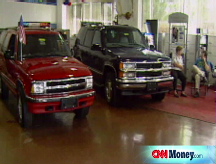 Motor city is the U.S.A.
More than 2 million workers in every state - including Alaska and Hawaii - draw their pay from the auto industry. »»

Now that the White House and congressional Democrats have agreed on the shape of an auto rescue package, it is time to get serious about your proposed new duties.

Under the terms currently discussed, you would be tasked with shaping a restructuring of the industry and keeping an eye on how the government's money gets spent. That's all well and good, but there is a lot of opportunity for mischief here, as well as inflicting some big-time damage.

So assuming you will be coming from outside the auto industry and share prejudices similar to those displayed by congressional representatives from non-auto states - as well as newspaper editorialists who ride bicycles to work - I thought you might appreciate some suggestions on what NOT to do.

1) Don't ban the auto executives from their corporate jets. As much as we all enjoyed seeing General Motors CEO Rick Wagoner stuffing his lanky frame into a Chevy Malibu for the drive to Washington, that really isn't a productive way for him to spend his time. Neither is flying commercial. You know what air travel is like these days, and you can't get much work done on an airplane surrounded by all those prying eyes.

2) Remember that developing a new car is like a pregnancy: There is a defined length of time involved that can't be shortened without dire consequences. So let's not have any more questions about why Ford (F, Fortune 500) and Chrysler are introducing new pickup trucks in the teeth of a recession. Those trucks weren't thought up yesterday; they have been in development for four years. To can them now - or even delay their arrival - would cost tens of millions of dollars.

3) Don't expect the automakers alone to wean America from its gas-guzzling habits. In the words of GM's Bob Lutz, forcing Detroit to build small cars so that we consume less foreign oil is like trying to prevent obesity by forcing clothiers to make garments in smaller sizes. GM (GM, Fortune 500) made the right decision not to build hybrids when Toyota did: unlike in Japan, where gasoline is expensive, there was no market for them in North America.

Where GM did go astray, in case you are wondering, is in not moving quickly enough to switch from body-on-frame SUVs to crossovers, which are safer and get better fuel economy. They were making so much money on the old ones, they couldn't bring themselves to change.

4) Never forget that you can't force consumers to buy cars they don't want. You may decide you want everybody in fuel-sipping minicars, or in rubber-bumpered safety cars, but if the automakers can't build them and sell them at a profit, what's the point?

One of the reasons Detroit is in a bind is that government fuel economy regulations have forced them to build small cars that consumers don't want and thus must be sold at a loss. You are probably tired of hearing this by now, but a $2-a-gallon gas tax would have gotten people into smaller cars without distorting the marketplace.

5) Inflict equal pain on everyone. One of the reasons GM still supports money-losing brands like Saturn and Saab is that it can't afford to close down their independent dealers. State-by-state franchise laws offer them rock-solid protection should an automaker eliminate a brand.

Dealers need to give a little and so do the United Auto Workers - they are still making more than their non-union counterparts at the transplants. If you want to punish the auto executives too, make them promise to spend half their time outside Detroit so they can see what the rest of the world is driving.

6) Don't be too hard on the automakers. I've never met one (well, maybe one or two) who wasn't sincere, honest, and hardworking. Sure, they have made some boneheaded calls by focusing on short-term results instead of long-term trends, but don't forget - GM and Ford have both been in business for more than 100 years, and old companies become encrusted with customers and practices the way barnacles grow on a ship.

They haven't been competing on a level paying field with import manufacturers who were able to start with a clean sheet of paper a few decades ago when it came to choosing and locating dealers and building factories.

Oh, and by the way, they haven't been getting rich at the same time that they fleeced investors, the way some of the boys on Wall Street did. Every stock option ever awarded in Detroit is under so much water it has probably drowned by now.

Who could replace GM's CEO?