Raymond James' chief strategist, Jeffrey Saut, says that for the first time in a decade, stocks are cheap. Don't miss out.

Hold on to equity 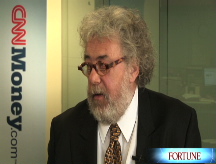 NEW YORK (Fortune) -- You'll have to forgive Jeffrey Saut if he savors 2008 a little longer than the rest of us.

For in a year during which the S&P 500 fell a stunning 38.5%, venerable investment banks crumbled, and 401(k) plans from Tacoma to Tampa were vaporized, the chief strategist at Raymond James was one of those few market gurus with a legitimate claim on the four sweetest words in the Wall Street vocabulary: "I told you so."

Weeks after the Dow Jones Industrial Average closed at a record high of 14,164 on Oct. 9, 2007, Saut picked up on ominous signals from the market and began warning clients to raise cash, hedge their portfolios, and come into 2008 in a defensive position.

So while he hasn't exactly delighted in watching the market collapse over the past 12 months, he admits to an understandable level of self-satisfaction - even if his words fell on deaf ears.

"Not many people listened," said Saut when I spoke with him in late December. "That's just human nature. It's the damnedest thing. This is the only business I've ever seen where, when you mark the price of the product up people want to buy it and when you mark it down people want to sell it. Nobody wanted to hear what I was saying because the Dow had just made a new all-time high. And what are they doing now? They're dumping their stocks right when they shouldn't be. It's amazing. I've watched it for 30-plus years."

Yes, you read that right: Saut thinks you should be buying into the market right now. "For the first time in 10 years, I can actually say that stocks in the aggregate are cheap," he said. "I have not been able to say that until the past few months."

In fact, Saut says that by his preferred metric - the median price/earnings ratio of the 1,800 stocks in the Value Line market index - stocks are the least expensive they have been since the early 1980s.

If that's not enough, he has plenty of other data points to reel off. For instance, he points out that for the first time in 58 years the yield on the S&P 500 is higher than that of the 10-year or 30-year Treasury.

Oct. 10 was an extremely important day to Saut. That's when, he says, many investors gave up - and he turned bullish. "Of the 3130 stocks that traded on the New York Stock Exchange that day, 2901 made new yearly lows, or 93%," he said. "And even though the averages have gone lower since then - not meaningfully lower, but lower - we have come nowhere near that kind of percentage capitulation reading."

Capitulation, of course, is usually a sign that the bottom is near. Saut isn't ready to say we've hit it yet, but he advises that investors start moving money into equities over a period of months.

"Let's say you have $400,000 to invest," he explained. "I'd break it into four tranches of $100,000. You then find four good mutual funds - probably a small-cap, a mid-cap, a large-cap that focuses on dividend stocks, and a well-diversified international - and you buy $25,000 of each one of those here. And then some time in the first quarter you buy $25,000 more of each one. Then do the same thing in the second quarter and the third quarter. And I think you have a pretty good shot of having some pretty decent returns over the next three to five years."

If you're too scarred to get back into stocks right now, not to worry. Saut says this is a rare moment to invest in bonds. "I'm not a bond person, but there have been few times in history when bonds offer equity-like returns and now is one of them," he said. "For instance, investors are puking up munis, which makes for a nice opportunity."

To take advantage of that misguided disgorgement, he has been recommending a couple of closed-end, municipal bond funds: BlackRock MuniHoldings Insured Fund II (MUE) and Nuveen Insured Dividend Advantage (NVG).

Both funds currently have yields above 6% and trade at more than a 10% discount to their net asset value, or the aggregate value of the underlying securities they own. Saut began recommending them when they were 20% below NAV. (A closed-end fund is one that sells a fixed number of shares, doesn't sell or redeem shares the way an open-end fund does, and trades on an exchange like a stock.)

While Saut is sanguine about the bargain-hunting prospects for investors, he's more cautious about the overall economy. "Any kind of recovery is going to be a limp recovery," he said.

"One thing that has historically snapped us out of recessions is real estate and I don't think that's going to happen. The boomers are done! We're not going to buy any more houses. The house-buying years are between your 30s and 50s. So I don't think you're going to get the zing of a bounce-back in housing that you would typically get. This is not your father's recession. But that doesn't mean you can't make really good returns. For the well-prepared investor, volatility breeds opportunity."

After all, prices are finally marked down.

How to make money with rates at zero