Automaker defections may turn into a stampede from the time-consuming, expensive and increasingly obsolete events. 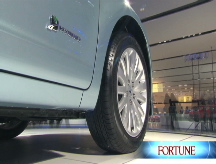 So it would seem. This month, Nissan followed the lead of Porsche and pulled out of the annual Detroit auto show this month without ill effects.

And now, General Motors (GM, Fortune 500), Ford (F, Fortune 500), and Chrysler have decided not to exhibit at the biennial Tokyo Motor Show coming up this fall.

The immediate reason is economic. Most automakers around the world are losing money and need to cut expenses. GM confessed that it spent $2 million on the Tokyo show in 2007. That is a lot of money to show your flag in a country where you only sell a couple of thousand cars a year.

But the real reasons for ditching the shows go deeper. The automobile landscape is changing and doing things in familiar ways in familiar places just isn't cutting it any longer.

It required an industry outsider to point this out. One of the first things that caught Bob Nardelli's eye when he got to Chrysler was that the cash-short company was exhibiting its wares at 60 or more shows every year. Does it make sense to haul your new cars around the country so you can exhibit them to customers when your dealers are supposed to be doing that all year long for free?

Besides the direct cost of setting up and staffing exhibits, there is also the executive time consumed with news conferences, entertaining, and general schmoozing. It may be fun for all involved but it doesn't make a lot of sense in the Internet Age.

Frankly, Detroit and Tokyo aren't the centers of the automotive world any longer. The Japanese market has been shrinking for years as economic activity slows and the population ages. And some experts now believe that U.S. car sales won't run much higher than the scrappage rate for the next several years.

If there has to be a domestic auto show, Los Angeles in November - or any time of the year - is lots more appealing than Detroit in January.

The new centers of the auto industry are places like Shanghai and Mumbai. A Chinese company named BYD, for Build Your Dreams, recently announced that it intends to become the world's largest auto company in the next 15 years. That's the kind of chutzpah you don't find in Michigan these days.

From the point of view of hardware, auto shows are already obsolete.

Most of the new models that are unveiled with such ceremony at the shows have turned up on the Internet days or weeks in advance. Meanwhile, face-to-face contact with colleagues, sources and customers is nice but can be done in less frenetic surroundings.

For years, a certain segment of the auto industry has resembled a traveling circus, moving from Geneva in the spring to Frankfurt and Tokyo, or maybe Paris in the fall, and then on to Los Angeles and Detroit toward the end of the year.

It sounds glamorous until you think about spending all your time in overcrowded exhibit halls and then fighting for taxi cabs for overcrowded evening functions. All except the most peripatetic would surely enjoy a more efficient way of doing business.