He's going to spend like never before. He's going to bail out the financial system. And there's no play book. 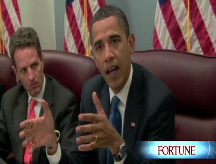 WASHINGTON (Fortune) -- We know this much about how Barack Obama plans to govern: He will deploy the fattest checkbook ever at the disposal of an incoming American president.

When President Obama sits down today at his Oval Office Resolute desk (Queen Victoria's gift named for a British frigate), he will have on hand $350 billion in just-pledged rescue money for the nation's financial system - and the very likely prospect of a $825 billion-plus "economic recovery" package landing on his desk for signature within a month.

These hundreds of billions are largely the product of historic circumstance, not the fulfillment of campaign pledges. But how wisely this president directs emergency taxpayer dollars - even as he handles an incoming barrage of surprise new spending needs in these fragile times - will chart his administration's success in reviving the economy.

As Obama's repeated warning that "none of this will come easy" suggests, there is no pat formula for a federally directed recovery.

It's become glib political conventional wisdom in Washington that a massive spending plan will provide a parachute rescue for a cliff-diving economy - landing it safely and with strong enough legs to move toward a healthy future.

In fact, the Obama economic recovery package will be a grand historic experiment.

Top Obama economic adviser Christina Romer has studied 20th-century recessions and concluded that monetary tools, not fiscal spending, produced recoveries. Even in the Great Depression, monetary expansion, not FDR's public works, opened the way toward recovery beginning in the spring of 1933.

"It's not that fiscal policy didn't work, but it wasn't really tried," Romer told the Senate Banking Committee last week, adding that Roosevelt's much-vaunted federal spending programs were actually "relatively small." (Romer, who advised Obama during the campaign and will become chair of his Council on Economic Advisers, co-authored much of her academic work with her husband and fellow University of California, Berkeley, economist David Romer).

Now, though, Romer and other Obama advisers are betting that the $825 billion package under consideration in the House will be big enough to alter the history that they've all studied.

They are also betting on the fact that a package divided between $550 billion in spending and $275 billion in tax cuts will be the right mix, even though Romer's research also shows tax cuts to have a larger multiplier effect on the economy than spending.

All the politically charged decisions on where those federal dollars will be spent will also affect the success of Obama's recovery plan. Increasing arts funding and Pell grants for college students - both in the House package - may be good causes, but are these the kinds of line items that will turn around the economy and contribute to 3 million new jobs?

President Obama's other checkbook - the $350 billion in financial rescue money known as TARP, or Troubled Asset Relief Program - is already a gigantic experiment, still carrying a question mark as to whether it will work to ease the nation's credit crunch.

The Obama administration is determined to run the program differently than the Bush administration - with more clarity about its purpose and mission, and more accountability to Congress.

Daniel Tarullo, Obama's choice to sit on the three-member Federal Reserve Board, makes the case that this operational change alone will produce results. "When markets have a better sense" of what to expect from TARP, he told senators, they will be in a "better position to judge."

How an Obama Treasury Department chooses to spend the second half of the $700 billion TARP package will also affect the markets, though. The new administration is determined to spend a good chunk of that money to stem rising home foreclosures. "It was a big mistake not to directly confront the foreclosure crisis," says incoming CEA member Austan Goolsbee.

But that falls into the easier-said-than-done category: How to avoid the "moral hazard" question by distinguishing between deserving and undeserving homeowners and how to provide incentives to lenders who have sold off the loans they originated - as well as to the financial firms that now hold those securitized mortgages. (One option under consideration: Use the restructuring of Fannie Mae and Freddie Mac mortgages to create a new standard of industry practice for lenders.)

On top of this, Obama's economic team is exploring how to turn TARP back toward its original mission of buying up some of the bad assets that are behind massive bank losses, how to prevent cities from defaulting and how to curb a consumer credit crunch (a new lending facility called TALF, for Term Asset-Backed Securities Loan Facility, has leveraged a $20 billion Treasury contribution into what Obama advisers consider a promising start).

Technical, detailed and hard to explain to voters, none of this was on Obama's radar screen last spring when he accepted the Democratic nomination for President. Then, he was promoting ways to bolster a stagnating middle class - with plans for universal health care, shifting the tax code, promoting union jobs - not keeping the economy from collapsing out from under these same families.

I interviewed Obama in June, a week after he claimed the nomination. Unemployment had just risen to 5.5% (it's now 7.2%), and crude oil had just hit a record $138 a barrel. Gas prices were in the headlines, and Obama focused his economic comments on his plans to make America energy-independent.

But presidents don't always get to choose the timing, or substance, of their policies.

George W. Bush was going to be the compassionate conservative - until terrorists attacked. Obama was going to revive the middle class - until the financial system collapsed and the entire economy needed reviving.

Obama is demonstrating he's already no stranger to that truth.

As he told CNN about the outgoing president he spent two years deriding: "I think he made the best decisions that he could at times under some very difficult circumstances."

Part of the Obama stimulus package is a tax credit of $500 for individuals and $1,000 for couples (with some income restrictions). Tell realstories@cnnmoney.com what you will do with the money if Congress passes the measure. Your responses could be part of an upcoming story.

An end to union battles, a 'card check' solution