During boom times, the heavy equipment maker couldn't keep up. Now with a slowdown, it has a chance to regroup. 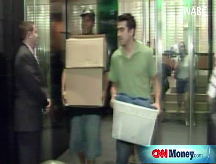 NEW YORK (Fortune) -- During the great global boom in the early years of the 21st century, few companies benefited more than Caterpillar.

Its familiar yellow-colored trucks, road graders, and power shovels were at work building skyscrapers in Shanghai and infrastructure projects in Mumbai. A worldwide spike in commodity prices caused orders to back up for equipment to carve out tar sands in Canada and copper mines in Peru.

Owning a piece of Caterpillar machinery in those heady days was the equivalent of investing in a hot growth stock: The machinery could be put to work and monetized in the blink of an eye.

So the news that Caterpillar is cutting 11,500 jobs from its payroll, and another 8,000 from independent contractors, is confirmation - as if anybody needed it - that the global boom has convulsed into a global recession that continues to widen and deepen. Like few others, Caterpillar is as exposed to the global economy as the weathervane on a barn. When activity slows or comes to a halt, there is nowhere for it to hide.

But as painful as the cuts may in the short term, they could make Caterpillar healthier in the long run.

When Fortune reported on Caterpillar a year and a half ago, the company was struggling to keep up with its pell-mell growth as it revamped its production system. "New products were slow to get out of the factory because production ramped up haltingly; shipment delays and inventory bulges tied up billions of dollars," we observed. "During peak production, glitches were common." Worse, revamping production while factories were running full-out was the same as overhauling the engines of an airplane while it was still in the air.

Well the factories aren't running full-out any more. And with a smaller number of workers who are now anxious to hold onto scarce jobs, the company won't have any trouble seeking ways to motivate them to do things smarter and better. This is just the time for Caterpillar to fine tune its production system, which it borrowed from Toyota, to get it operating at peak efficiency.

A breather is surely needed. Like auto manufacturers, Caterpillar sells its heavy equipment through independent dealers. But unlike auto companies, Caterpillar does not disclose its monthly production, sales or inventory levels.

Still, it isn't too difficult to imagine the consternation at those dealers today. With economic activity at a standstill, they have lots filled with acres of unsold yellow equipment that they are being forced to finance month to month. And were Caterpillar's factories still running at full strength, the company would be pushing more and more inventory on them.

Unlike cars, a backhoe or motor grader can't be sold with an advertising campaign or higher marketing incentives. It takes more than a push from the manufacturer to move a project along from the planning and financing stage, to make it "shovel ready" for new Caterpillar gear. The dealers were pretty much dependent on the overall level of business activity.

But if Caterpillar can successfully adapt lean production to its distribution system the way that Toyota did for its own system, then the dealers' inventory problems should be significantly alleviated.

If and when the economy turns up, Caterpillar will be among the first to know. Orders will start coming in. Until then, hunkering down is the smart thing to do - as long as the company takes this opportunity to make sure it is fully prepared for an eventual upturn.