At Davos, an upside-down world

Business leaders are arguing for more regulation, while politicians are appealing for a hands-off approach. 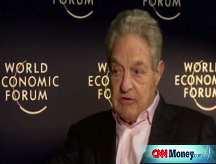 DAVOS, Switzerland (Fortune) -- At last year's gathering of the world's elite at this Alpine ski resort, the tone was one of unbridled optimism. CEOs, government leaders and heads of NGOs had the luxury to discuss the rapid growth in new technologies, innovation in the financial industry (oops), and ways to combat hunger, disease and global warming. This year's World Economic Forum conjures a radically different zeitgeist.

At first glance, some things about Davos haven't changed. Attendance is still strong, with at least 2,500 movers and shakers wandering the halls and standing-room-only crowds at many of the events -- although one session on how business could help make the world better was sparsely attended.

And while some Davos standbys such as McKinsey and Google (GOOG, Fortune 500) have cut back or canceled their parties, the well-heeled do still have money. By one count, some 600 private jets flew to Davos, causing a backup at the Milan, Italy, airport. One panelist at a climate-change program suggested that the well-heeled fly commercial next year for the sake of global warming, soliciting some snickering from the audience, although it wasn't clear whether the reaction was from those who felt this gesture would make little difference to climate change or from those who were reluctant to give up their G-5s.

But the real story at Davos is that the economic world seems to have turned upside down, with its leaders living in some parallel, bizarro universe that would have been unthinkable pre-crisis. First off Russian Prime Minister Vladimir Putin, a leader of a nation not particularly known for its hands-off approach to business, warned of the dangers of a state-owned economy because it stifles innovation and growth. At which Bill Clinton later quipped, "I'm pleased to hear Putin come out for free enterprise. I hope it works for him." Laughter from the audience.

So we have a political leader arguing for less government. What about the business community? At a later session, PepsiCo (PEP, Fortune 500) CEO Indra Nooyi argued that "Capitalism leads to greed. We have to get the best and the brightest to go into [government] regulation." Hmmm. Steven Green, the group chairman of the British banking house HSBC (HBC), which has 330,000 employees, spoke next. (He is to be congratulated as one of the few bankers willing to come out in daylight.) Green seconded Nooyi's sentiment by arguing for more "effective regulation." Although he did point out that: "Without strong values in a company, regulation will not work."

After this dizzying reversal of roles, with government leaders wanting less of what they do and former free marketeers asking for the invisible hand to be made a bit more visible by lawmakers in national capitals, former British Prime Minister Tony Blair stepped in and seemed -- at least for a moment -- to make the world right again. He warned of using the financial crisis to create a "closed world" where government stifles innovation and pursues beggar-thy-neighbor policies. "The state," he said, "is not the answer." Government has a new role, Blair went on to explain, but it is not to control industry but to help business take advantage of these troubled times. "Why not use the crisis to invest in the energy of the future, to help everyone in the global community?" he concluded to vigorous applause from an audience long thirsty for a little optimism.

Russians to U.S.: Give us the Fed