These days, online services and applications are sexy. Hardware? Not so much. 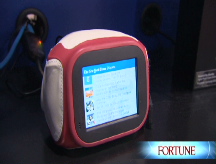 SAN FRANCISCO (Fortune) -- Our love affair with PC hardware may be waning in this recession. Instead, we're smitten with services.

We still like the results of computing - we couldn't have services like our beloved YouTube, Facebook or iTunes without warehouses full of servers somewhere, processing bits. But there are signs that we're burning out on buying traditional computers.

Even cell phone sales are suffering, but at least there's excitement at the high end with the iPhone, BlackBerry, and upcoming Palm Pre - all of which blend computer-like features with pocketable convenience. Contrast that with PC-land, where the only sustained buzz appears to be around low-end netbooks.

Businesses are shifting the focus of their tech spending as well. Consider Dell (DELL, Fortune 500), the hardware giant. When Dell hosts dozens of corporate technology buyers near its headquarters this week, a prominent theme will be how to get by with less technology gear, says outgoing Dell Chief Information Officer Steve Schuckenbrock. That might sound self-defeating, but rather than try to sell customers a lot more hardware, Dell will focus on offering them - get this - advice on how to be more efficient.

The services racket, meanwhile, is going gangbusters. Again, some numbers: IBM's (IBM, Fortune 500) earnings rose 12% despite the economic meltdown, largely thanks to a services arm that uses IBM technology and smarts to solve customer problems. (IBM's hardware business, meanwhile, was off 20%.)

Google (GOOG, Fortune 500) - which is really a glorified advertising service - recently turned in quarterly results that were stronger than analysts expected. Salesforce.com (CRM), the poster child for online business services, said sales rose 43% in the most recent quarter.

What do these companies have in common? They don't try to fuel growth with big-ticket hardware sales. Instead, they sell service contracts or online software, part of a pitch to save customers money. These days, that pitch is resonating.

As Salesforce CEO Marc Benioff said back in November: In this economy, "customers are not going to bring out their checkbooks for the cost and risk and complexity of big database purchases, or application server purchases, or data center purchases." They're buying more services, and fewer servers.

What does this mean for tech? Hardware certainly isn't dead, but our relationship with it may be changing.

For consumers, it could mean a rapid shift toward cheaper gadgets. In the past, the masses continually needed expensive new computers for word processing, web surfing, photo editing, etc., and bought more powerful PCs. Maybe now folks mostly want devices that let them connect to Internet-based services, send a few Tweets, or upload a quick video - tasks that don't require the most powerful gear.

It's possible that as a result, consumers will buy more netbooks and smartphones, but fewer full-fledged PCs. In the short term, that might seem like bad news for PC industry stalwarts like Intel, Microsoft, Hewlett-Packard (HPQ, Fortune 500) and Dell - but there also could be opportunities for them to make money by growing their business selling the lower-cost devices.

What does it mean for businesses? So far, it means more outsourcing. The benefit is pretty straightforward: Rather than keep your own I.T. staff, buy your own computers and software and struggle to make it work, you can pay an outsourcing company a flat fee to handle those headaches. These days that idea is so popular that IBM saw its North American outsourcing business grow 45% last quarter, a spokesman told me. (See editor's note below)

As quickly as business conditions are changing, the technology services could still stumble in 2009. But so far, they're looking better than hardware.