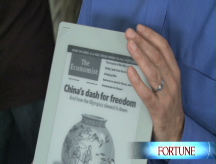 (Fortune) -- Read any good e-books lately? It's a question coming soon to a water cooler near you.

After years of trying to convince readers to ditch their hardcovers and paperbacks in favor of digital readers, electronic-book manufacturers are having their moment in the sun. Hot on the heels of the success of its Kindle e-reader, online bookseller Amazon (AMZN, Fortune 500) is widely expected to unveil a new version of the device next week.

Sony (SNE), meanwhile, has been heavily marketing its electronic reader, and industry executives say more tablets for electronic books are on the way.

E-books are gaining fans among commuters and road warriors. Mike Downs, a Kindle owner who travels frequently as a marketing consultant for a tech company, recently wanted to read The Game Changer, by Procter & Gamble (PG, Fortune 500) chief A.G. Lafley and consultant Ram Charan. "I downloaded a sample chapter right then and read it at the airport," he says. "When I finished, the Kindle asked me if I wanted to buy the book." Downs did, and read it on the flight home.

Downs' experience underscores why the Kindle, released in 2007, has been so popular. The $359 device, which is about the size of a thin hardcover, has built-in wireless connectivity that allows customers to purchase and download e-books in less than a minute. Users can also preview chapters before buying and subscribe to periodicals. No wireless bill or contract required. (The Sony Reader, must be plugged into a computer to download material.)

Another virtue of the Kindle, fans say, is a technology called E Ink that makes the Kindle's screen appear similar to a page in a book. Users claim it keeps the technology from getting in the way of the reading experience, unlike a glaring backlight which can keep a bedmate awake or prevent reading outdoors, not to mention quickly draining a battery.

Such innovations have helped the Kindle transform the e-reader market. And the next generation Kindle could accelerate mainstream adoption of e-readers. Analysts expect the new Kindle to offer an updated design -- better keypad and buttons -- and faster page downloads thanks to improved E Ink technology.

The Kindle sold out prior to the Christmas holiday for the second year in a row, in part because of the Oprah effect: In October she told viewers, "It's absolutely my new favorite thing in the world."

The Kindle has benefited from a 67% increase in available titles since its launch -- there are now 230,000. Google's recent agreement with publishers and authors to provide access to millions of books online also has huge implications for the technology.

And more e-readers could hit the market soon. They were the talk of the Consumer Electronics Show last month, and during a recent visit with Fortune, Best Buy (BBY, Fortune 500) President Brian Dunn, who owns a Kindle and a Sony Reader, said that while traveling in Asia he learned of two other major companies planning e-reader launches.

Most investment analysts are cautiously optimistic about the growth prospects for digital book readers. A Credit Suisse report ascribes to CEA's estimate that e-readers will be in nearly two million homes, a mere 1% of U.S. households, by the end of this year. The report estimates the penetration rate will climb to 16% by 2011 -- about half the growth rate of MP3 players.

But Van Baker, an analyst at Gartner, sees e-readers as a niche market. "It's a wonderful product for mobile professionals, but to be a consumer success it would have to appeal to Joe Six-Pack consumer." Baker thinks the average consumer won't see the value in reading a book on a digital device and points to drawbacks like the need to charge the battery and the fact that you can't give an e-book to a friend or resell it. He doesn't find its features very compelling either. "Can I carry 10 physical books with me at a time? No I can't. But how many people need to do that?" The economic slowdown doesn't help e-readers' prospects, either.

Still, supporters believe it is only a matter of time before books go digital, just like music and movies have. Citigroup analysts have gone as far as to call the Kindle "the iPod of the book world" and project Kindle-related revenues to reach $1.2 billion in 2010. In the future, instead of asking your friends what's playing on their iPod, you may be inquiring, "What's on your Kindle?"