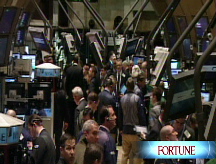 NEW YORK (Fortune) -- For most investors, staying the course is easy enough when stocks are climbing. But when the market drops, the urge to dump struggling holdings often proves all too powerful.

Enter Neil Hennessy, whose funds are designed to take such compulsions out of the equation. "If emotion enters the conversation, at some point things will get ugly," he says.

Instead, Hennessy sticks to two basic rules. First, he picks stocks purely by the numbers to keep the selection process objective. And he rebalances just once a year, eliminating the temptation to try timing the market.

Backing up this strategy is a strictly data-driven process that hones in on undervalued stocks with a climbing share price. Take his best-performing fund, the Hennessy Focus 30: The screen sifts through 10,000 mid-cap U.S. companies to find low share price-to-sales ratios and growing earnings. It then whittles the list to 30 stocks with the best price momentum over the past 12 months.

The winning picks go into the portfolio at equal weight to spread the risk. "If one goes broke, it's only 3%," says Hennessy. "We never get overloaded. You can be the best manager in the world, but you just don't know which of your stocks is going to run."

Then comes the tough part: holding steady, no matter which way the market turns.

"Investors are basically paying Neil to have a steel stomach," says Morningstar analyst Greg Brown. "He's been in the business a long time, and he really stands by his process."

It's a process that has helped the Hennessy Focus 30 earn a standout five-year record. With a 2.3% five-year annualized total return, the fund beats the S&P 500 (SPX) and outperforms 97% of other mid-cap blend funds, according to Morningstar. Down 33% in 2008, the fund held up better than 80% of its peers.

Still, potential investors need to feel comfortable placing full faith in the fund's screen. Hennessy does: If a stock lands in the top 30, it goes into the portfolio even if he has never heard of the company. Last fall, this scavenger hunt led him to several new names including identity-badge maker Brady Corp. (BRC) and Ralcorp Holdings (RAH), which produces store-brand cereals, crackers, and jellies.

Hennessy says both companies have strong businesses that should be relatively isolated from the downturn. But Brady's shares have proven to be far less resilient than Ralcorp's: Brady sank 30% in 2008, while Ralcorp finished the year down just 4% and has climbed 7% since.

To make the most out of Hennessy's discipline, investors have to steel themselves, too: The fund's bias toward momentum stocks, or stocks that have been outperforming the market, makes it fairly volatile. And the strict no-tamper approach isn't without its own risk.

Hennessy, who notes that the average price-to-sale ratio of the Dow Jones components is currently well below the 15-year average, thinks that stocks are finally cheap. But if the market turns around too far in advance of the fund's rebalance, the Focus 30 may not be positioned to ride the bull market's initial surge.

"If you miss out on that gain, it can really impact your returns over the next three to four years," says Morningstar's Brown. "An active manager can turn quicker to deploy assets."

The other cost of a strong stomach? The fund's 1.23% expense ratio, a steep fee for its semi-passive approach.

Two retail stocks for a recession