The man who wooed Woz

How Don Basile, the CEO of a storage start-up, convinced Apple co-founder Steve Wozniak to go back to work. 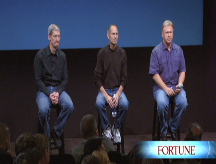 (Fortune) -- Amid all the reports last week of rising unemployment and Washington's struggle to pass a stimulus package readers of the business press could not be blamed for missing the news that Apple (AAPL, Fortune 500) co-founder Steve Wozniak accepted a job as chief scientist at Fusion-io, a storage startup based in Salt Lake City.

The move wasn't a complete surprise: Wozniak joined the advisory board of the company back in the fall of 2008. Don Basile, the CEO of Fusion-io, says after spending more time with the company Wozniak became convinced he could do more for the company than simply serve in a consulting role. "Steve is going to help us productize the technology, and also explain it," says Basile. "He's a very good speaker and evangelist for the transformation we're trying to do here."

The transformation Basile is referring to is Fusion-io's effort to bring flash memory, the erasable computer memory technology commonly used in consumer devices such as digital cameras, to enterprise computing. Fusion-io designs flash storage cards that can be attached to servers. Using flash, Basile says, the company essentially is able to put the equivalent of a multi-drive disk storage system into a unit that could fit on a human palm.

Basile says he and Fusion-io first approached Wozniak about the company in early 2008 after hearing the personal computing pioneer speak at an event. Basile recalls that Wozniak was initially skeptical of Fusion-io's proposition, but was intrigued enough to want to learn more. Basile kept sending him information, and eventually persuaded him to join the advisory board.

But according to Basile both he and Wozniak realized the company would benefit from a deeper relationship. "It was all about time, many of us have been on boards and it is a very different time commitment than working for a company," Basile says. "It was very exciting that he would change his time commitment; it's a big endorsement for the concept the company has."

Wozniak wasn't reachable for comment, but he told the New York Times: "I like the people and the product, and said I would like some greater involvement."

Wozniak isn't exactly playing hard to get these days. A few days after Fusion-io announced the hiring of the tech icon, ABC reality show Dancing with the Stars said Wozniak would be one of 13 contestants during its the eighth season.

Still Wozniak's willingness to go back to work underscores Basile's powers of persuasion. A twenty-year tech and telecom veteran who has worked in startups and big corporations such as IBM (IBM, Fortune 500) and AT&T (T, Fortune 500), Basile nonetheless didn't know Wozniak when he first pitched him on Fusion-io. But friends say his smarts and straight-shooter demeanor make him incredibly convincing, especially when it comes to promoting the merits of technologies he believes in. "I am not surprised, however, that Don could lure someone of [Wozniak's] caliber," says Alan Cohen, a Cisco (CSCO, Fortune 500) vice president. "He has a remarkable ability to focus on the key strategic issues in the IT market as well a plainspoken, straight-arrow perspective on his business."

Now Basile has to pursuade more customers to adopt Fusion-io's storage solutions. The company already has scores of loyal users, but other companies, including storage heavyweight EMC (EMC, Fortune 500) and server maker Sun (JAVA, Fortune 500), are promoting flash technologies of their own. But Basile says the addition of Wozniak not only helps Fusion-io develop its technology and sales strategy, it also serves to energize the whole company.

"When you have on your team a star who has been an innovator for decades that just makes the whole team better and makes it easier for you to recruit," he says. "Steve is a rock star."