Silicon Valley chip company SiBeam has a wireless replacement for that tangle of cords behind your TV set. 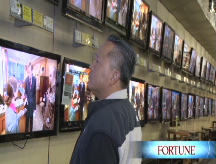 (Fortune Magazine) -- If you have shopped for a television recently, you know that screens have gotten incredibly thin, even as they continue to get bigger and offer better resolution.

Flat-panel televisions are finally deserving of the name, and a spot to be hung on the wall, though they still require a rat's nest of cables to connect cable boxes, DVD players and stereo systems. But SiBeam, a startup chip company based in Silicon Valley, has a solution to get rid of that tangle of cords: beam HD data wirelessly from any device to your sexy screen.

Wireless HD can simply be thought of as sending a boatload of data across a wireless link, except that it is a data flow many, many times greater than your average home network. To put it in perspective, the amount of digital information required to show a movie in high definition is comparable to the data pipe required to light up an entire office building with run-of-the-mill broadband Internet.

In fact, because of the tremendous amount of data that SiBeam's 60 GHz spectrum range can carry, it has been used on the rooftops of buildings to beam data from one building to another. Another use might be for a bank with several locations that wants to build a single, giant network. The 60 GHz spectrum has also been used by the military, mostly the Navy, to beam information back and forth between ships at sea.

The technology's main drawback until now is that it requires exotic chip fabrication to build the radios. That translates to price tags for 60 GHz networking gear that run into tens of thousands of dollars. That expense might be worth it if you are the U.S. Navy or a large bank occupying most of a building, but not if you are a couch potato just looking to watch some HD television without plugging in a cable.

Over five years and with about $75 million in venture capital funding (raised from Foundation Capital, New Enterprise Associates and US Venture Partners as well as a strategic investment in December from Panasonic and Samsung), SiBeam has built 60 GHz chips using standard chip fabrication materials and techniques. What that means is that in a few months, for a few hundred dollars, you'll be able to beam almost as much data wirelessly across your living room as the Navy does across the ocean.

It's even better in some respects than what the Navy has. While the Navy requires a line of sight with no obstructions to make its wireless connection, with SiBeam's gear you can get up to get a beer and walk in between the TV and the transmitter and the signal gets bounced off the walls without interrupting the program.

At the Consumer Electronics Show in January, both Panasonic (PC) and LG announced televisions incorporating SiBeam's technology. Toshiba showed off a computer with wireless HD capability, and Gefen demonstrated adapter boxes that can bring wireless HD to existing devices. And since it is an investor, you can be sure SiBeam's technology will be pushed out in Samsung's gear soon.

There are competing technologies, including ultra-wideband (UWB) and wireless home digital interface (WHDI), but SiBeam and its WirelessHD looks to be getting to market first, and has significant support behind its WiHD approach from a wide collection of consumer electronics companies and chip companies.

How to buy a flat-panel HDTV
Netflix, LG in HDTV venture
Samsung bets big on the great outdoors