The stock is cheap, but its core business doesn't look like it's going anywhere.

Family auctions all on eBay 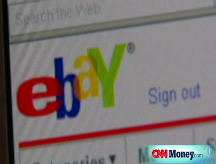 SAN FRANCISCO (Fortune) -- With the market dipping back below November lows, it feels a bit mean-spirited to be picking on any single company, but please - what has happened to eBay?

At about $12 (EBAY, Fortune 500) it's trading barely above a 52-week low of $11 and is down 56% in the past 12 months. Like the rest of the market, the Internet company is essentially back to where it was when economic panic set in last fall.

These are tough times all around, but why then are eBay's competitors chiefly Amazon, but also Taobao in China and GMarket in Korea fairing so much better?

One big reason is that virtually no one cares anymore about eBay's original business, the online auction. When is the last time you heard someone all breathless about bidding on some tatty piece of furniture?

Part of the problem is no one is spending money on furniture or anything at the moment, but compounding the issue for eBay is that a lot of people just aren't hassling with auctions anymore.

In the fourth quarter the total value of all successfully closed listings on eBay's auction platform (otherwise known as gross merchandise volume) was down 26% year over year. The auction business accounted for 26% of its fourth-quarter revenue of $2 billion. In contrast, fixed price sales accounted for 25%, and are growing at about the same rate as the rest of the ecommerce world.

"Auctions remain a big anchor, in the negative sense," writes Citigroup Analyst Mark Mahaney, who has a hold on the stock and a target price of $15 - 13 times his 2010 earnings estimate. "eBay has a format problem."

That "format problem" is dragging down the rest of what are pretty solid businesses that eBay owns, chiefly online payments service PayPal and internet calling company Skype.

Both outfits are showing good growth, even in the face of recession. In the fourth quarter, the number of PayPal active accounts, the people that use the service grew 23% year over year, and revenue from transaction payments grew 12%. Skype revenue grew 5% (not accounting for foreign exchange).

Forget about the "synergies" that eBay claimed it was going to get from acquiring Skype for the then-ungodly sum of $2.6 billion, they aren't even pretending they have a plan to pull that off these days.

But Skype as a standalone business is starting to hold its own, and with a revenue run-rate of $600 million, maybe eBay wasn't so foolish after all. Combined, the two business account now for about 22% of eBay's revenue, up from 16% a year ago.

Given its overall performance, eBay is an uninspiring stock, though trading at a forward P/E of about 8, it looks cheap. But if you look at the parts, says Morgan Stanley's Mary Meeker, it begins to look more attractive.

Meeker, who has an "equal weight" on the stock has a fair value price of $18. Using what she calls a "sum-of-the-parts" valuation that separates PayPal, Skype and other peripheral businesses from its core marketplace business, Meeker arrives at a valuation of $19.

"The market assigns very little value to eBay's core marketplace which seems draconian," Meeker told clients. "That said, we believe that eBay shares will continue to trade at a discount to sum-of-the-parts valuation, until trends improve in eBay's core business."

When that improvement comes is the crux question of course. eBay has been a "value" stock seemingly since 2007, when it was trading at a then relatively thrifty 15 times earnings. It is cheaper today (along with plenty of other stocks), but it is likely to be a long wait before any upside appears.