Inside the Bear Stearns boiler room

Exclusive book excerpt: Bestselling author William Cohan uncovers the inner workings of the misadventure that brought down Bear Stearns and foreshadowed the financial crisis to come.

Bear Stearns 'not a victim' 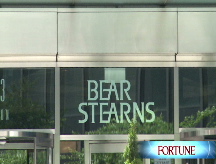 NEW YORK (Fortune) -- Years from now, when academics search for causes of the stock market crash of 2008, they will focus on the pivotal role of mortgage-backed securities. These exotic financial instruments allowed a downturn in U.S. home prices to morph into a contagion that brought down Bear Stearns a year ago this month - and more recently have brought the global banking system to its knees.

What scholars should not miss is the role that the human element - call it greed or ignorance - played in this tragedy. In an exclusive excerpt from William Cohan's new book, "House of Cards: A Tale of Hubris and Wretched Excess on Wall Street," to be published March 10 by Doubleday, the bestselling author sheds light on the bankers who thought they had mastered what Warren Buffett has called "financial weapons of mass destruction."

By looking back to the roots of the misadventure in which Bear Stearns traders Ralph Cioffi and Matthew Tannin lost roughly $1.6 billion while allegedly misleading investors, Cohan illustrates how the missteps of the few can have consequences for the many.

When the first jet hit the World Trade Center towers on the morning of September 11, 2001, Jimmy Cayne, then chairman and CEO of Bear Stearns, turned on a small television in his midtown Manhattan office and watched in disbelief as the second jet hit the south tower. Later in the day, Cayne got a call from Richard Grasso, then CEO of the New York Stock Exchange, telling him that it was important to the United States government that the exchange reopen as quickly as possible. To that end, Grasso said there would be a meeting the next morning at the stock exchange among the heads of all the Wall Street firms.

When Cayne woke up the next morning, he saw on the news that New York City had closed off access to lower Manhattan below 15th Street, including the New York Stock Exchange. Cayne called Grasso at home and offered to host the meeting instead at Bear Stearns. Grasso quickly agreed to Cayne's suggestion, and the meeting was held in the seventh-floor boardroom on Wednesday at two o'clock. "Everybody in the world was there," Cayne said. "Everybody. This was heavy cake. I've never seen all these people, the heads of every major firm, sit in a room and not hate each other."

Talkback: Who's most to blame for the fall of Bear Stearns?

Bear Stearns, the fifth-largest U.S. investment bank, survived the 9/11 attacks unscathed, just as it had survived unscathed every other major crisis since its founding in 1923, among them: the Great Depression, World War II and the 1987 market crash. Indeed, until the very end, the firm had never had a losing quarter in its history. But in the months following 9-11, Cayne and his senior management team, including Alan "Ace" Greenberg, Warren Spector and Alan Schwartz would unwittingly sow the seeds of the firm's destruction by betting heavily on the manufacture and the sale of mortgage-backed securities.

In the short run, the decision by Bear's executives to become a leader in this business resulted in huge profits for the firm - and massive paychecks for them. Along with bankers at Lehman Brothers, Merrill Lynch and Morgan Stanley (MS, Fortune 500), they were only too happy to capitalize on the mortgage boom that occurred in the wake of 9-11 when the Federal Reserve loosened the money supply.

One of Bear Stearns profit centers was a small hedge-fund division. The firm seeded it with a relatively trifling $45 million equity investment. Ralph Cioffi (pronounced Chee-off-ee), a longtime Bear Stearns fixed-income salesman turned hedge-fund manager, ran it. The funds were part of the firm's relatively tiny asset management business, known as BSAM. BSAM reported to Warren Spector, Bear's resident wunderkind, who as the firm's co-president (with Alan Schwartz) was responsible for overseeing 90% of its revenue, including its massive fixed-income business.

Like Cayne and Ace Greenberg, the boyish Spector was a world-class bridge player and many people both inside and outside Bear Stearns considered it inevitable that he would one day soon run the firm. In October 2003, Spector's friend Cioffi moved from Bear's fixed-income department to BSAM and set up a hedge fund, called the High-Grade Structured Credit Fund, with money from outside investors. The fund eventually would have around $1.5 billion of investors' cash in it. Then 47, Cioffi had joined Bear Stearns in 1985 as an institutional fixed-income salesman, specializing in structured finance products.

Cioffi grew up in South Burlington, Vermont, near Lake Champlain. From 1989 to 1991, he was the New York head of fixed-income sales and then, for the next three years, served as global product and sales manager for high-grade credit products. As a salesman, Cioffi covered the Ohio Public Employees Retirement System account and was making around $4 million, year after year. "He was the top fixed-income salesman in a firm where fixed income was king," said one senior managing director.

"We all grew up with Ralph here," explained Paul Friedman, who was the chief operating officer of Bear's fixed-income division. "Ralph is one of the smartest guys I've ever met and was absolutely the best salesman I've ever met. When I was a trader, he was a salesman, a fabulous salesman. He was incredibly personable, incredibly smart, creative and could get things done." As a manager, Cioffi was another story. "He had adult ADD," says Friedman.

Helping Cioffi run the hedge fund was Matthew Tannin, six years his junior. Tannin, born in New Jersey, was a graduate of the University of San Francisco law school. He joined Bear Stearns in 1994 and spent seven years structuring collateralized debt obligations. In 2001, he moved over to research, where he studied the trading and value of CDOs.

At the outset, Cioffi and Tannin (pronounced Ta-neen) told investors the High-Grade Structured Credit Fund would invest in low-risk, high-grade debt securities, such as tranches of CDOs, which the ratings agencies had rated either AAA or AA. The fund would focus on using leverage to generate returns by borrowing money in the low-cost, short-term repo markets to buy higher yielding, long-term CDOs.

The difference between the interest rate at which the fund could borrow money and the yield on the CDOs, enhanced by the use of borrowed money, would generage the fund's profits. In August 2006, Cioffi and Tannin decided to open a second fund, the Enhanced Fund, that used substantially more leverage - and took more risk - than the High-Grade Fund. The Enhanced Fund had about $600 million of investors' money in it and used a $400 million credit facility from Barclays, the large British bank, to leverage the securities Cioffi and Tannin bought.

For 40 months, Cioffi's High-Grade hedge fund never had a losing month. During that time, it achieved a 50% cumulative return. The Enhanced Fund also performed well during its short existence. In typical hedge fund fashion, BSAM kept 20% of the profits generated by the funds plus a 2% fee on the net assets under management; fees from the High-Grade Fund alone accounted for 75% of BSAM's total revenues in 2004 and 2005.

Next: Trading securities and Ferraris

Excerpted from House of Cards: A Tale of Hubris and Wretched Excess on Wall Street by William D. Cohan, to be published in March, 2009 by Doubleday, an imprint of the Knopf Doubleday Publishing Group, a division of Random House, Inc. Copyright 2009 by William D. Cohan.