The search-engine giant is no. 1 again among B-school students, according to a new ranking of top MBA employers. But there are other big changes on this year's list: Bye-bye, investment banks. 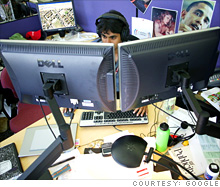 NEW YORK (Fortune) -- In this job market, any offer is good, but MBA candidates still consider some employers better than others.

Every year Miami-based research firm Universum publishes a list of where B-school students most want to work for an exclusive Fortune.com list.

For the third year in a row, search-engine giant Google tops the list, with consulting firm McKinsey & Company in second place. But lower in the rankings, there were many changes due to the global financial crisis and recession.

Gone, of course, is investment bank Lehman Brothers, which collapsed last fall. Merrill Lynch, no longer an independent firm after being bought by Bank of America in September, plummeted to no. 55 from no. 18 last year. Some financial services firms, though, managed to stay in the top 15, including J.P. Morgan, Morgan Stanley and Goldman Sachs (now a bank holding company).

Big players like General Electric and Johnson & Johnson also were able to stay in the top 15 thanks to their strong brand and reputation, says Claudia Tattanelli, CEO of Universum North America.

But with consumer spending down, retail companies didn't fare as well this year as they have in the past. Caffeine-purveyor Starbucks, for example, slid to no. 27 from no. 17, while discounter Target dropped to no. 44 from 26.

Less concerned with a prospective employer's prestige, MBAs are broadening their horizons this year, Tattanelli says. Instead, they're more interested in finding innovative companies with positive work environments.

"MBAs have opened up to a whole new set of employers," she says

One newcomer, Blackstone Group, is the first and only private equity firm to ever make the list. President and COO Tony James credits the firm's appeal to the access and exposure its 15 or 18 new hires a year receive.

"We try to offer an extraordinary professional experience," he said. Incoming associates are teamed with more senior executives on high-level projects and they "are equal in any discussion - that's exhilarating," James said.

Also making an impressive first showing was Palo Alto-based design firm, IDEO, at No. 15. The 500-person company is responsible for Crest's Neat Squeeze, Tivo's set top box and remote control and, most recently, Bank of America's "Keep the Change" program.

When IDEO held an on-campus recruiting event at Wharton this year, "the room was packed," Tattanelli said.