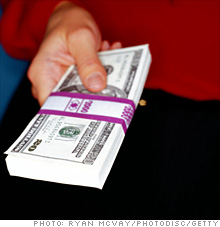 NEW YORK (Fortune) -- Visitors to the basement auditorium at NYU's Stern School of Business on Wednesday could be forgiven for thinking they were hanging out on Sand Hill Road: Seven financiers and tech journalists congregated on stage to assess the merits of ten tech startup business plans. "You should be able to bake your company into a Tweet," advised Business Insider senior editor Dan Frommer, advising the entrepreneurs to focus their pitches.

The winning company - a crowd-sourcing site for patent busting called Article One Partners - took home a check for $25,000 from General Catalyst Partners, free office space and a good amount of professional services. Oh, and the distinction of being New York's most promising startup.

It's Internet Week in New York City, where Silicon Alley entrepreneurs and financiers are partying like it's 1999. Sure, there's the small matter of a global economic recession. Financiers give a nod to it with calls for bootstrapping. But among the web startups in New York, that's long been the way to build a business anyhow.

And deals are flowing. Venture capitalists invested $228 million in 39 New York tech startups in the first quarter, according to the National Venture Capital Association, even as other financing avenues nearly ground to a stop. That's roughly on par with a year earlier. "Digital media seems to be one area in which the recession has not been felt nearly as strong," said Susan Lyne, formerly of Disney (DIS, Fortune 500) and Martha Stewart Living Omnimedia (MSO), who recently became CEO of online sample sale company Gilt Groupe. (Her startup, along with TheLadders.com, was awarded "Most Likely to be Worth More than a Billion Dollars" by the Silicon Alley Insider.)

To cultivate these businesses and encourage more, the International Academy of Digital Arts and Sciences in cooperation with the City of New York and the Mayor's Office of Film, Theatre and Broadcasting is sponsoring a weeklong festival of conferences, cocktail hours and late night confabs. From Yelp.com's Jeremy Stoppelman to John Battelle, founder of Federated Media, plenty of West Coast digerati have come to town to help celebrate. And a smattering of International entrepreneurs are seizing on the opportunity. Blonde 2.0 founder Ayelet Noff, who came all the way from Tel Aviv to rub elbows with her peers, said, "Everyone I would want to connect with is here, and it's so much easier to get here than to fly all the way to California. "

That's a big change in just a few years. Just ask former DoubleClick CEO Kevin Ryan, who used his proceeds from the ad network's sale to a private equity company that sold it to Google (GOOG, Fortune 500) to co-found AlleyCorp, a network of a half-dozen tech startups including Silicon Alley Insider and Gilt Groupe. "When we started DoubleClick [in 1996] there wasn't a single person who had tech startup experience," he said.

Blip.tv cofounder and COO Dina Kaplan agrees. "For years there was no community. If you were starting an Internet company and you weren't part of the last boom, you didn't know anybody," she said. "Now you can't cross the street without running into an entrepreneur. And that's great because you can't thrive in a vacuum."

Kaplan is partially responsible for building that community. Together with Bain Capital Venture's Dan Allen and Jason Rapp, formerly head of mergers and acquisitions at IAC (IACI), she started Founders' Club in January 2007. The quarterly cocktail party is one of the most elite events in New York for startup CEOs and founders; the 175-person guest list for the June 4 event is sealed. Barry Diller will host the mixer on a private rooftop garden overlooking Rockefeller Center as a welcome party for AOL's new CEO Tim Armstrong and News Corp (NWS, Fortune 500).'s new digital head Jon Miller. Guests include NBC Universal's Jeff Zucker, WPP's Martin Sorrell and Rupert Murdoch. Kaplan reports there will be a famous New York City ice cream vendor on hand, and the rooftop pool will sport floating boots with the names of New York's tech startups.

And while the city has its benefits for startups -- greater access to journalists for exposure, for example, and more opportunities to rub shoulders with the large media and advertising companies that may one day acquire them -- it also has its drawbacks. At a breakfast for women founders and CEOs held Tuesday in the penthouse of the Parker Meridien, many founders called for more engineering talent, and for help bringing down the cost in office space. Manhattan is not cheap.

Then there's the venture capital community. "I've raised money five times now, and each time I've gone to Boston," said Ryan. But as the Internet industry comes of age in New York, and entrepreneurs sell their companies and begin investing themselves, even that may change.