The 6'3'' author of a new tome on tallness talks about the pros and cons of stature - literally - in the workplace. 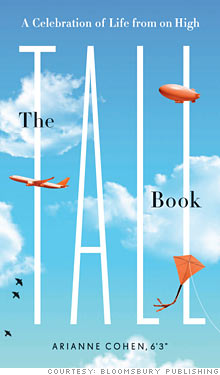 NEW YORK (Fortune) -- It's often been suggested that the CEOs of the Fortune 500 are of above-average height. We've never done the number-crunching ourselves, but unofficial studies suggest the assertion has merit. Arianne Cohen, the 6'3'' author of The Tall Book: A Celebration of Life from on High, maintains there is a tangible correlation between height and success -- and offers up a variety of theories on why tall people tend to thrive in business and elsewhere. Fortune recently sat down with Cohen to talk about the role height plays in the workplace.

So there's really a connection between height and success?

It's huge. Tall people make an average of $789 per inch per year and this has been shown repeatedly in a set of four large-scale salary survey studies over 50 years in both the U.K. and the U.S.

Numerous studies show that when bosses are given real and fictitious resumes of two competent employees, there's about a 70% chance that bosses will pick the taller person for the job. In follow-up studies where the managers were asked to rate the employees coming in to the job, they gave flying color reviews to the tall people, which is hilarious because none of the employees had even done anything yet. The clear implication of this is that tall people are perceived as very competent before they ever display proof that they are.

Why is that the case?

One reason tall people are successful is that they are very memorable. We are evolutionarily primed so that whenever somebody sizable walks in the room, everyone in the room glances, because millions of years ago the biggest person was either going to be a protection or a threat. Being memorable is a major boon if you're doing great work, but it's a double-edged sword: If your work is awful, everyone is going to know it; they won't forget.

So how do you explain shorter CEOs like Jack Welch and Ross Perot?

These are broad statistics, and there are many short people who do succeed. But people of any height who are successful tend to display certain behaviors that correlate with success. Jack Welch's wife actually told me that Jack thinks he's really tall. And there are behaviors that correlate with success. Successful people, whether short or tall, are known and seen. You know when Barry Diller walks into a room, and Jack Welch commands his physical space. So shorter people who are powerful often display many of the same behaviors as tall people.

There are also a number of short CEOs who have succeeded by avoiding the corporate ladder and starting their own companies. This is definitely the case for Ross Perot, who is a self-made billionaire. Ron Perelman and Barry Diller also started their own companies instead of trying to move up from inside a company.

What are the best and worst jobs for tall people?

Tall people make more money and also tend to cluster in higher-paying fields. This is because they tend to thrive in fields in which social interactions take place, since they're helped by their body language. So tall traits are going to shine in these kinds of jobs. For example, if I were a litigator, I would be able to use the full power of my tall body to command presence, whereas if I were a clerk sitting behind a desk, I would gain no benefit from being tall. Granted, plenty of tall people flock to other fields -- for example, there are a disproportionate number of tall people in police work, firefighting work, and physical work where being tall would be of value.

What advice do you have for tall people in a job interview?

They say that when you're networking, your goal is to be liked. You want to make someone as comfortable as possible. To do this you need to adjust your body language and be hyper-aware of yourself. In my case, this means no hovering. I go out of my way to kill the dumb jock stereotype by being as verbally coherent as possible, and I always sit down as soon as I possibly can. I gain nothing by standing there flexing my physical might.

Isn't it sometimes better to be short than tall?

The big challenge for tall people is that they cannot hide. Tall people are always public, and this can be pretty tough. Short people and those of average height can camouflage and sort of disappear in a crowd when they choose to. It's just a beautiful thing to be able to hide, and really stressful when you're tall and not able to do this.

Have you ever wished you were shorter?

Absolutely. In my first job, in consulting, we would sit around in the conference room and I would always be the one called out and asked questions -- especially when I hadn't even had a chance to have my first cup of coffee. Now it's not a matter of wishing I were short, but of wishing that I could make the awkwardness and all of the really god-awful body language just go away!

Your best business advisor: You