An inside tale of Lehman Brothers' downfall

Exclusive first look: A bond trader's new book, A Colossal Failure of Common Sense, tells how the firm's leaders ignored all the warnings. 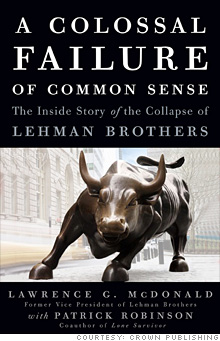 NEW YORK (Fortune) -- They started with a trickle and now rise up into a formidable wave as the one-year anniversary approaches of the near-implosion of the world's financial system: the new tell-all books, breathlessly promising to tell us "what really happened."

Nearly every morning, the Time Inc. mail-delivery guy knocks on my door to drop off yet another thick galley stuffed with purple prose and finger pointing. It has gotten to the point that I can barely find my desk anymore. But at least one story jumps out from the others, because it's not about a crisis averted or the case of an institution too big to fail. It's the tale of Lehman Brothers, which rose and fell in spectacular fashion, ending with the largest bankruptcy filing in U.S. history.

While other authors have weighed in with gripping accounts of the crash of Bear Stearns (including Fortune contributor William Cohan), Lehman's collapse is a $600 billion crater unto itself. That's why I've started digging into the latest tomes with an exclusive first look at Lawrence G. McDonald's A Colossal Failure of Common Sense: The Inside Story of the Collapse of Lehman Brothers (Crown Business; to be released July 21).

Written with novelist Patrick Robinson, the book is engaging and even funny, which is tough to do when you're writing from the perspective of a bond trader at a now-extinct company. McDonald, who worked for Lehman for four years, was laid off in early 2008, at a time when the company's death spiral was already well underway but the world hadn't quite figured it out yet. But even then, McDonald writes, it was obvious to him that Lehman CEO Dick Fuld and his right-hand-man Joe Gregory made decisions that led directly to the company's demise. While McDonald carps, as most Lehman folks do, about the fact that their company was the only major Wall Street firm allowed to fail, his ultimate takeaway is an important admission to hear from an insider. Lehman, says McDonald, went down because of hubris and arrogance. It bought too high, sold too low -- and oh yeah, leveraged itself up the wazoo in the process.

To hear McDonald tell it, this was no surprise to anyone on the fourth floor, where McDonald and his team traded distressed bonds. As far back as the spring of 2005, Alex Kirk, Lehman's global head of high-yield and leveraged loans, looked at the masses of residential mortgages that Lehman had bought, sliced, diced, and resold and called foul. "This housing market," he snapped, "it's all 'roided up."

That comment soon led to a prescient move on the part of the debt traders to short the stocks of major home builders -- and prompted a meeting led by Mike Gelband, global head of fixed income, which focused on the potential danger that Lehman faced if the housing bubble were to burst. Notwithstanding the moral question of whether an investment bank should be shorting the stocks of companies that would suffer from a real-estate crash while promoting the securitized mortgages that kept pumping air into the bubble, the fourth-floor crew was right. Even back then, Lehman was leveraged to the tune of 22 times its net worth; not only was it securitizing mortgages as fast as it could accumulate them, but it had even bought two mortgage companies outright.

One darkly funny anecdote finds McDonald and a colleague sitting in the parking lot of New Century Financial in Irvine, Calif., counting the Jaguars and Lotuses all around them. "I definitely never before saw one single spot on God's green earth with so many top-of-the-line automobiles parked shoulder to shoulder," he wrote. He shorted the company, which later went under in April 2007.

According to McDonald, the fourth-floor crew tried repeatedly to warn those in the 31st-floor executive suite of the trouble ahead, but no one seemed to be listening. In a 2007 meeting with top executives, McDonald writes, trader Larry McCarthy laid out, loud and clear, the trouble ahead (neither Fuld nor Gregory attended, McDonald reports). "You see that right there?" McCarthy demanded hypothetically. "That's a f---ing iceberg, and we're headed straight for it, flank speed. Even the g--d---ed Titanic tried to swerve."

Simultaneously, the bank had embarked on a huge foray into commercial real estate, which culminated in the company buying the Coeur Defense office complex in central Paris in 2007 for $2.8 billion, at what may have been the absolute top of the market. McDonald charges that Fuld was motivated as much as anything by envy of his former Lehman colleagues now at Blackstone Group, Pete Peterson and Steve Schwarzman, and their swashbuckling series of purchases. "There were probably no other men in all of New York whom Richard S. Fuld Jr. would rather see fail," McDonald writes. "And now they were on the rise, making money and headlines faster than he was, and announcing the launch of an IPO." McDonald, who, it must be noted, apparently never met the men, describes them as reclusive and out of touch.

McDonald says he never saw Fuld visit the trading floor once while McDonald was employed. One by one, the Cassandras of the firm, including McCarthy and Gelband, quit, frustrated and worried, until finally in June 2008, the remaining executives, led by global head of equities Bart McDade, led an in-house coup. While McDonald had left Lehman by that time, he is apparently well-enough sourced to describe the secret dinner held by 12 top Lehman executives in June 2008, culminating a week later in the riveting scene in which McDade strode into Fuld's office and informed him that either Joe Gregory had to go -- or Fuld did. "This was done behind my back!" McDonald writes that Fuld yelled. So Gregory was out, along with controversial CFO Erin Callan.

It was much too late to save the ship. The government opted not to save Lehman, which was overleveraged and sitting in a sea of alphabet-soup derivatives that almost no one wanted to buy, even as Fuld vainly insisted that his contemporary Hank Paulson would bail the firm out. In the early morning hours of September 15, Lehman died -- almost taking the world's economy along with it. A mistake for the financial system? Perhaps. But if McDonald's account of Lehman's final days is accurate, it was essentially built to fail.

Derivatives: The risk that still won't go away