How Starbucks lost its 'fidelity'

Exclusive book excerpt: In the trade-off between quality and convenience, the coffee juggernaut fell into the trap of becoming too familiar. 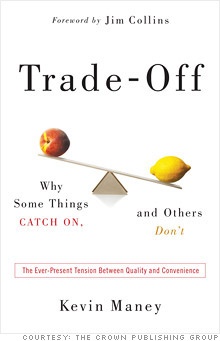 Recession or not, international restaurant concepts are fanning out in the world's hungriest fast-food market.
View photos

NEW YORK (Fortune) -- In this adaptation from his new book, Trade-Off: Why Some Things Catch On, and Others Don't (Broadway Books), author Kevin Maney explains the tension between two key qualities and how a great brand got caught in a no-man's-land between them.

We constantly, in our everyday lives, make trade-offs between fidelity and convenience.

Those trade-offs, and how they affect business, help explain why Starbucks (SBUX, Fortune 500) hit a wall in 2007 -- and why CEO Howard Schultz is still struggling to get his company's mojo back.

Fidelity is the total experience of something. At a rock concert, for example, it's not just the quality of the sound, which often isn't as good as listening to a CD on a home stereo, but also everything else going on, like the crowd around you and the social cache of later telling people you saw the band live.

Convenience is how easy it is to get what you want. That includes whether it's readily available, whether it's easy to do or use, and how much it costs. If something is less expensive, it's naturally more convenient because it's easier for more people to get it.

Consumers are willing to give up convenience for great fidelity, or ditch fidelity for great convenience. But anything that offers just so-so fidelity and so-so convenience falls into a no-man's-land of consumer apathy that I call the fidelity belly. That's where music CDs, newspapers, and desktop Windows-based PCs find themselves today.

Remarkably, the most successful products and services tend to be either high in fidelity or high in convenience -- one or the other, but not both. In fact, products attempting to be both typically end up with a confused brand, like if McDonald's (MCD, Fortune 500) tried to do gourmet meals.

This impossible place of both fidelity and convenience is something I call the fidelity mirage. And Starbucks chased it big-time.

After a decade of stupendous success, Starbucks ran into trouble in 2007. Fewer people were coming into its stores. Profits sank. The stock dropped by nearly half through the year. In early 2008, Howard Schultz, who'd built the coffee chain into a global phenomenon, took back the CEO job he'd relinquished eight years before. Almost everything he said about what went wrong points to one simple explanation: Starbucks chased the fidelity mirage.

Starbucks, during its heyday, was about fidelity. Schultz had become enamored with the coffee business while selling Swedish-designed kitchen equipment. That led him to visit Starbucks when it was a tiny specialty coffee bean roaster in Seattle. He signed on as an employee, went to Milan on a business trip, and discovered Italian espresso bars with their rich brews, overwhelming aroma, elegant traditions and neighborhood camaraderie. It all gelled into an epiphany for Schultz: "If [Starbucks] could re-create in America the authentic Italian coffee-bar culture, it might resonate with other Americans the way it did with me," Schultz wrote in his autobiography, Pour Your Heart Into It. "Starbucks could be a great experience, and not just a great retail store."

Schultz bought Starbucks from its founders in 1987. If you look back on what he was thinking in those early days, you can see that it was all about creating a high-fidelity experience that was greater than just the coffee. He wanted Starbucks stores to have "a taste of romance" and be "an oasis -- a small escape during a day when so many other things are beating you down," Schultz recalled.

And the products Starbucks served? While Schultz always believed that the coffee had to be special, that was probably the least of Starbucks' attraction. Starbucks' other beverages and the rituals they spawned--the ordering of half-caf skinny double lattes--were at first intriguing and luxurious. Eventually they became a cultural touchstone. Once Starbucks arrived on the scene, it suddenly seemed boring to walk into a deli or a Dunkin' Donuts and just order coffee with cream and sugar.

When it was fresh and new in the world's consciousness, Starbucks had a special aura. The green label on a cardboard cup made the coffee it held seem better. Holding that Starbucks coffee cup, being seen in a Starbucks, and being enough of a regular that you knew your favorite complex beverage combination off the top of your head conferred a bit of identity. And for all of this, Starbucks charged premium prices.

As coffee goes, there was essentially nothing convenient about Starbucks. You had to travel to find one (in the early days), wait in line, and pay exorbitant prices for a product you could make at home or in the office for relatively nothing. But that didn't matter. Schultz had put together everything needed to create a high-fidelity experience. Few businesses executed high fidelity in their product so well. And that is why the Starbucks brand exploded onto the scene in the late 1990s.

Schultz then did what any ambitious CEO would be driven to do: He took full advantage of the love shown Starbucks and launched aggressive expansion plans. If you build fidelity, the temptation is to then pursue growth. But that behavior can lead to the very thing that can kill a high fidelity brand: familiarity.

Which is exactly what happened to Starbucks. As economist and author Tyler Cowen told me: "Once Starbucks became ordinary, it was committing suicide."

Starbucks carpet-bombed the world with its franchises. The satirical newspaper The Onion published a headline: "New Starbucks Opens in Restroom of Existing Starbucks." Schultz retired as CEO in 2000 (though he remained as chairman) and the next two CEOs pushed expansion plans even harder, while extending the Starbucks brand to include ice cream, packaged beverages, and a record label. In 1998, the world was populated with 1,886 Starbucks stores. Ten years later, there were 16,226. Schultz blessed it all, convinced that Starbucks could be everywhere and still be special.

On the flip side, Starbucks could not achieve genuine convenience while attempting to hold onto its sense of fidelity. The prices of Starbucks' products were too high, and Starbucks had another convenience problem: lines. Making fancy customized drinks like frappuccinos tied up the baristas, causing back-ups. Customers realized that if they were looking for a quick, good-enough cup of coffee, it was easier to go to McDonald's or 7-Eleven, and save a few bucks.

Starbucks' customers reacted predictably. Despite more Starbucks around than ever before, people started veering away. In 2007, same-store traffic slipped for the first time in Starbucks' history. People looking for convenience saw less reason to pay Starbucks' prices. People looking for aura and identity turned back to smaller chains or independent local coffee shops. In mid 2008, Dale Roberts, owner of the independent Java Shack in Arlington, Va., reported that his sales were growing by double digits while Starbucks stumbled. "I think there is a surge of people wanting to go back and feel at home with coffee," he told the Washington Post.

Most people know this feeling instinctively. When anything -- a brand, a rock band, a style of clothing -- becomes popular with a huge mass market, the cool people increasingly find it uncool, and look for something new.

In February 2007, Schultz could see what was happening to his company. He wrote a memo to then-CEO Jim Donald, deploring "the watering down of the Starbucks experience" and "the commoditization of our brand." In January 2008, Schultz booted Donald out and took back the CEO position. He immediately began reaching backward, toward Starbucks' high-fidelity core. He told CNBC's Maria Bartiromo that Starbucks would "go back to our roots and reaffirm our leadership position as the world's highest-quality purveyor of specialty coffee." Schultz added: "It reminds me of the old days when our company was very creative, very entrepreneurial, and we were fighting for survival and respect."

Schultz got a lot of media attention for two dramatic moves. First, he shut down 7,000 Starbucks stores for three hours so 135,000 baristas could learn how to correctly make a Starbucks espresso. (Whether they really needed to get that training or not, the move sent a message to the public that Starbucks was serious about quality.) Second, Schultz announced that 600 Starbucks outlets in the United States would close. Though that's only about 5% of the total -- and Starbucks had plans to open 350 new stores in different locations -- the move marked the first time Starbucks backed away from its drive for convenience.

This year, Starbucks got so desperate to win back its premium position, it started opening "stealth" stores--Starbucks-owned stores minus the Starbucks name, meant to mimic small, independent, high-fidelity coffee shops.

Will Schultz be able to help Starbucks regain its luster? It could be tough. As economist Cowen points out, for a brand like Starbucks, familiarity and ubiquity are deadly. The aura and identity Starbucks once had is gone for most Americans. It doesn't mean people will stop going to Starbucks. But it does mean people will be less inclined to seek out Starbucks. Coffee purveyors that are more convenient (like McDonald's or 7-Eleven) or are perceived as higher fidelity (independent coffee shops or smaller chains) will have an easier time competing against Starbucks than they used to.

--Adapted from Trade-Off: Why Some Things Catch On, and Others Don't, by Kevin Maney, published this month by Broadway Books. Copyright 2009 by Kevin Maney.

First Published: September 16, 2009: 12:27 PM ET
Advice to Howard Schultz from behind the counter