Behind the Zhu Zhu mania

This year's hottest toy, a motorized, furry hamster, started its journey to store shelves as an idea inspired by YouTube. 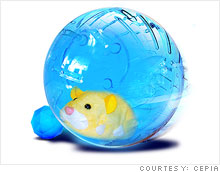 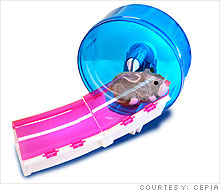 TimetoPlayMag.com picks Barbie Fashionistas, Crayola Crayon Town and LEGO Star Wars among the top toys of the year. Our experts, all under the age of 10, weigh in.
View photos

NEW YORK (Fortune) -- Zhu Zhu Pets, the inexplicably cute robotic hamsters that have become this year's overnight holiday toy sensation, are selling out across the country.

A caller to the Times Square Toys R Us in Manhattan on a recent Wednesday morning was informed that the store was out of the hamsters and wouldn't be getting its next shipment until Friday. Wal-Mart (WMT, Fortune 500) and Target (TGT, Fortune 500) shelves are also bare of the toys, analysts said.

The National Retail Federation recently listed Zhu Zhu among the top 10 holiday toys. Zhu Zhus are even showing up on eBay, priced at $60 to $100. The runaway success has created a dream come true for Cepia, the small, St. Louis-based company that created the motorized pets.

Cepia founder Russell Hornsby, 56, who got his start in the toy industry as a designer for Mattel 35 years ago, became convinced that the toys would be a home run after watching thousands of YouTube videos of live hamsters.

The plush Zhu Zhu hamsters, which sell for $9.99 apiece and have names like Mr. Squiggles and Pipsqueak, look remarkably lifelike. They wiggle their noses and shimmy and shake through their hamster habitats just like the real thing.

Working with a factory in Shenzhen, China, Hornsby designed the first Zhu Zhu prototype in November 2008 and then began the uphill battle of trying to convince retailers to place orders. That was during the depths of the financial crisis and many big chains were unwilling to gamble on an unknown product, but Hornsby eventually convinced Toys R Us to test-market Zhu Zhu -- which means "little pig" in Chinese -- in a handful of Phoenix stores. All the Zhu Zhus sold out in two weeks.

"It was so hot, we couldn't believe it," says Gerald Storch, the CEO of Toys R Us. "We immediately bought as much as we could."

Although instantly popular, Zhu Zhu could have easily failed as thousands of new toys do each year. The sudden success of Zhu Zhu comes after a long career of ups and downs for Hornsby.

After Mattel (MAT, Fortune 500), Hornsby worked for a series of companies, including Hyman Products, which sold novelty items, such as pieces of the Berlin Wall. In 1981, Hornsby founded Trendmasters -- a toy company that held the license to make toys under the "Star Wars" and "Godzilla" names among others -- and sold it to larger rival, Jakks Pacific (JAKK), in 2001.

A year later, Hornsby started Cepia to make lawn and garden products such as automated trigger sprayers. Hornsby applied some of the technology he had developed for the garden products to Zhu Zhu, which helped give the animals their lifelike quality.

"What makes them so great is that they are unpredictable," says his daughter Natalie Hornsby, 23, who heads Cepia's marketing department. The underside of each hamster is covered in molded plastic -- called bump codes -- that keeps the furry creatures from repeating the same moves over and over again.

Once orders for Zhu Zhu started pouring in, Hornsby turned to his investors -- mainly family members, including his oldest daughter and wife, who also work for the company -- to raise more money. Natalie says Cepia, which has 16 employees, expects to sell as many as 10 million hamsters this year, and predicts Zhu Zhu could be a $500 million product by 2010.

"It's the single biggest hit he's had," says Needham & Company analyst Sean McGowan, who has known Hornsby for 10 years. McGowan points out that Zhu Zhu had an underground following from the very beginning, despite limited advertising, while other hot toys didn't become popular until celebrities called them out. Fisher-Price's Elmo, for instance, took off only after Rosie O'Donnell featured the doll on her television show.

Hornsby, who was traveling in Asia and unavailable for comment, is starting to attract interest from large toy companies, some of which have floated potential offers to buy Cepia, sources said.

Natalie also declined to comment on a possible sale of the company, but she said her father is a born risk-taker: Once when Hornsby was in Las Vegas, a friend of his remarked on the fact that he wasn't gambling. "I don't need to gamble in Vegas," he told the friend. "I gamble every day of my life."

Toys R Us to open at midnight on Thanksgiving