The fall of a Wall Street highflier 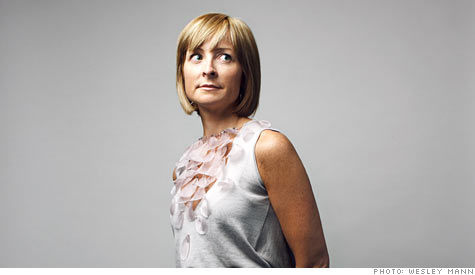 Such was the case at least on the March 2008 weekend after Bear Stearns collapsed. Global markets were reeling. Many feared that Lehman Brothers would be the next to fail. And Callan, a tax-lawyer-turned-investment-banker who had rocketed to CFO of Lehman at age 41, was about to be tested.

Throughout the weekend and then on Monday from 5 a.m. on, Lehman's brass, including Callan, hunkered down in the firm's Manhattan headquarters, making phone calls in the hopes of calming investors and trading partners. Despite their efforts, Lehman shares tumbled 19% that day.

By Tuesday the onus had shifted to her. She'd been CFO for only three months, and now she was essentially being asked to save the firm. She'd have to explain Lehman's quarterly results.

That meant sitting in a conference room with just a speakerphone and one colleague, and convincing panicked shareholders that Lehman was not in fact facing Armageddon. Before the call, CEO Dick Fuld patted Callan on the back. "Good luck!" he said. "I was like, 'Oh, my God,'" she recalled. "Like it just hit me at that point: There's a lot of pressure here."

But given a challenge, Callan always delivered. Over the next hour she fielded two dozen questions and assuaged suspicions that Lehman's assets were worth billions less than the firm claimed. Callan succeeded, and Lehman's stock price jumped 15% in an hour, lifting the firm's market value by more than $4 billion.

Upstairs, she saw Fuld again. "Dick said, 'The only complaint I have is that you shouldn't have hung up on the call. Because as long as you were on there, the stock kept coming up.'" Lehman's bond traders gave her high-fives.

For a moment Erin Callan was the most powerful woman on Wall Street. "Moment" is the key word, because she arrived like a flash -- a bright, glamorous figure, the likes of which Wall Street had never seen in a finance chief. She burned out even more quickly.

Her appointment as CFO -- the first woman ever on Lehman's 13-person executive committee -- made her a bona fide breaker of the glass ceiling. But her promotion also stunned many people. Callan lacked a background in accounting, treasury, or operations -- the usual routes to the CFO position.

When Lehman landed in the vortex of the financial crisis and CEO Fuld retreated from public view, Callan became the face of the firm. Her seeming candor and confident turns on CNBC briefly fueled positive publicity: "Lehman's Straight Shooter," the Wall Street Journal titled a May 2008 profile. One month later Callan was out. Three months after that, Lehman went bust.

Where are they now: Crisis edition

So ended the saga of Erin Callan as most people know it. But the rest of her story -- before her rise and after her fall -- is equally intriguing, perhaps more so. It's also draped in mystery. Today, 18 months after Lehman's bankruptcy, most of Callan's ex-colleagues are back in the game. Some, like Fuld, have started their own firms. Others have moved to private equity. Many have landed at Barclays (BCS), the British bank that bought the firm's U.S. core out of bankruptcy. And Callan? She's gone Garbo.

Poof! Callan has simply vanished from the business world. A month after leaving Lehman, she accepted a job at a rival investment bank, Credit Suisse (CS) -- only to depart five months after starting there.

Ever since, she has been out of touch, cutting off communication with practically all her former colleagues and many friends and declining repeated requests to be interviewed. (Callan's quotes in this article are taken from an interview she gave this magazine right after joining Credit Suisse and another that Fortune contributing editor William Cohan conducted with her right before she lost her job at Lehman.)

Why did a person with such drive and ambition -- still only 44 today -- give up her career?

Read the full story on what happened to Erin Callan