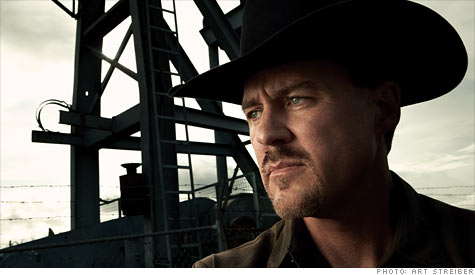 Erlend Olson: "We figured that if we could make a treasure map of where the oil is, why not go dig the treasure ourselves?"By Adam Lashinsky, senior editor at largeMarch 29, 2010: 10:01 AM ET

(Fortune) -- In the summer of 2008, Erlend Olson thought he had finally hit the jackpot.

A bit player in semiconductors for years, the former NASA engineer had made an improbable metamorphosis into a burgeoning oil-exploration kingpin. His company, Terralliance Technologies, a secretive startup in Newport Beach, Calif., had developed an algorithm for telling petroleum engineers where to drill.

Never mind that Olson was an electrical engineer with no background in oil. He had convinced some of the world's most sophisticated investors, including Goldman Sachs (GS, Fortune 500) and Kleiner Perkins, that his unconventional approach was legit. Kleiner would go on to bet a whopping $93 million on Terralliance, a sum that may be the storied firm's largest venture investment ever.

Terralliance hadn't found much oil, but its founder and CEO was so adept at locating cash reserves that he believed he was about to close a deal that would seal his company's future -- and his fortune.

He had come to New York that August to negotiate a financing with Temasek, the sovereign wealth fund of Singapore, which Olson had been romancing for months. The price of oil had recently soared to $145 a barrel, and Temasek planned to invest $1.1 billion, valuing Terralliance at more than $4 billion.

A hulking figure with a glassy-eyed intensity, Olson had assured his investors that an infusion of this magnitude could lead quickly to a public offering worth as much as $60 billion. That would make Olson, as he wistfully recalled later, a "three-comma guy."

Olson wasn't alone in counting commas. Kleiner Perkins thought it was on the threshold of its first mega-win since Google's (GOOG, Fortune 500) IPO in 2004. Goldman Sachs, which had been betting shrewdly on plummeting housing prices, envisioned another killing. Passport Capital, a young San Francisco hedge fund, anticipated burnishing its reputation for energy investments. John Fredriksen, a Norwegian supertanker mogul who had lent Terralliance $50 million only months earlier, stood to score a quick hit.

All told, the investors had sunk nearly half-a-billion dollars into Terralliance, an astounding sum given the audacity of the company's aspirations -- and the paucity of its accomplishments.

Why experienced investors pumped so much capital into such a risky venture is just one mystery in the tale of Terralliance, a saga that has not been comprehensively told despite the high profiles of the players involved.

Kleiner Perkins, a firm that loudly promotes its most promising investments, for years didn't list Terralliance on its website and declined multiple requests to comment for this article. Despite interviews with many of the key people involved, it's also not clear what exactly Terralliance's technology purported to do, or how well its investors understood it.

What is certain is that Terralliance's gambit to become a force in oil exploration ended badly. Despite Olson's high expectations, the unraveling began during those August 2008 meetings in New York.

Before taking Temasek's cash, Kleiner and Goldman thought it was important to share concerns they had about Olson. Terralliance's globetrotting CEO may have been an oil industry neophyte, but he had spent like a Saudi prince. His shopping list ran the gamut from oil wells in Turkey and Mozambique to demilitarized Soviet fighter jets.

An auditor had raised red flags about Olson's dealings in the Congo and referred its findings to the U.S. Justice Department for potential anti-bribery-law violations. As troubling, Terralliance had yet to close its books on 2007. Two lead board members, Joe Lacob of Kleiner Perkins and Joe DiSabato of Goldman, informed Temasek's lead negotiator, Nagi Hamiyeh, that they intended to demote the charismatic but free-spending founder to chief scientist.

It was all too much for someone wielding a city-state's checkbook. Instead of signing on the dotted line, Hamiyeh returned to Singapore. In early 2009 the board fired Olson outright. By then the price of oil had cratered, Temasek's stock market holdings had collapsed, and Terralliance had all but crumbled into a heap of litigation, layoffs, and recriminations.

By the spring Kleiner Perkins was in damage-control mode on Terralliance, even as it was promoting a new thrust into the field of "green" energy. As for Olson, who was out of work and raising new funds to continue his global quest for oil, not adding a comma to his net worth was the least of his worries.