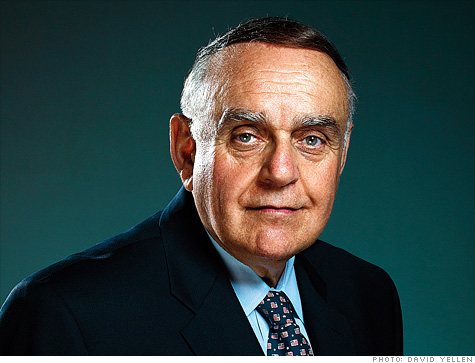 (Fortune) -- When it comes to hedge funds, few have been doing it longer -- or better -- than Leon Cooperman.

His equities-oriented firm, Omega Advisors, which manages $5 billion, has averaged 16% annual returns over its 18-year history, walloping the S&P 500's 10% yearly rise. Cooperman, 67, sees potential for the market this year.

He points to a spate of recent acquisition bids with 40% premiums (including Simon Property's offer to buy General Growth Properties) as a sign that executives think stocks aren't overvalued. Cooperman surveys the landscape in an interview with Fortune contributor Lawrence A. Armour.

Is the strength we've seen in stocks the past year likely to continue despite gridlock in Washington and high unemployment?

Yes. It's early in the cycle. Bear markets and recessions last 12 to 18 months, but economic expansions typically last three to four years.

Where are we now?

There's unanimous agreement that the recession ended in June, July, August of 2009. If that's the case, we're only six, seven, or eight months into a new economic expansion. Almost everybody -- myself included -- agrees it's not going to be robust, but if it matches the average, we have several years of growth ahead of us.

What should an individual investor be doing today?

I think U.S. government bonds are overvalued, so I would reduce those government holdings relative to high-yield industrials. I think large-cap growth companies with global exposure are undervalued, and I'd allocate an increased percentage of my assets to overseas markets.

We are underweighted in high P/E stocks, utilities, and some consumer discretionary companies. But we're eclectic and very bottom-up in terms of quality-growth franchise--type companies. We like Microsoft (MSFT, Fortune 500), McDonald's (MCD, Fortune 500), and Pepsico (PEP, Fortune 500). And with oil prices crossing $81 a barrel, we like energy stocks.

Atlas Energy (ATLS) is one of our big holdings. It has very large acreage in the prolific Marcellus Shale in Pennsylvania. Atlas is negotiating to bring in a partner to develop the acreage. When the transaction is completed, we think it will indicate a value for the company materially in excess of the mid-30s where the stock is now trading.

We also have a big position in Energy 21, which has a major discovery in the Gulf of Mexico. We like Transocean (RIG), which is the world's largest offshore-drilling company. Rates have been sluggish lately, but the only place you can find meaningful oil deposits is deepwater offshore, and these guys own somewhere close to 30% of the world's deepwater-drilling fleet.

What about health care?

We own Merck (MRK, Fortune 500). We also have large positions in WellPoint (WLP, Fortune 500) and UnitedHealthcare (UNH, Fortune 500). Both have a big dividend--paying capability, and we hope they wake up one day and start paying reasonable dividends. It would be very helpful to the price of their shares.

You usually own some oddballs.

I wouldn't call them oddballs, but we have a few special situations. We like Broadridge Financial Solutions (BR), which has a near monopoly in the distribution of annual reports, quarterly statements, and proxy materials companies provide shareholders. It sells around 12 times earnings and generates about a quarter of a billion dollars of cash flow every year.

We like Pactiv (PTV), which is a consumer and food-packaging company that sells at less than 10 times earnings. We like Altisource Portfolio Solutions (ASPS), which provides real estate and mortgage portfolio management to banks. Given the enormous pool of troubled residential real estate, these guys have an enormous opportunity. The stock sells at a reasonable valuation, and the company generates a lot of free cash.

We have a small position in Eastman Kodak (EK, Fortune 500). The company has as much cash as debt, so survival is not an issue, and it's doing a nice business in low-cost inkjet printers and supplies. We also own some E*TRADE (ETFC), which we think one day will be seen as an attractive takeover target.

What's behind the recent increase in takeovers?

It reflects the fact that the stock market is selling about in line with replacement costs. With the credit markets improving and business getting a little better, corporations are showing a willingness to buy other businesses, and they are paying up for them.

We have seen a large number of deals where the average premium over the market price has been approximately 40%. When Air Products (APD, Fortune 500) bids $5 billion in cash for AirGas (ARG, Fortune 500), which is 38% over market price, Air Products is telling us they feel sufficiently comfortable about their own business that they are willing to take on a lot of debt to do the deal.

It's the same thing with Merck AG's $7 billion offer to buy Millipore (MIL) and Simon Property's (SPG) $10 billion bid to acquire General Growth Properties (GGP). When you buy a share in a business, you're buying a share of its brick, mortar, machinery, and earning power. What corporations are saying is that the equity market is not overvalued.

At the same time, the Fed has kept interest rates at a level that will ultimately create a more speculative environment. That's not good, but it means you can go out today and buy lots of stocks with dividend yields that are materially in excess of what you're earning on your savings, and that's a plus for the equity market. Bottom line, we're looking as I said for the stock market to provide a 10-12% return this year. That would be better than bonds and certainly a lot better than cash.

Won't that depend in large part on Washington?

Yes, and that's potentially a big problem. Whether it's health care, cap and trade, investigating hedge funds, or dismembering banks, the agenda in Washington is far too broad. It's why all these mid-term elections are turning into a situation where if you're in, you're out, and if you're out you're in. There is a great degree of dissatisfaction among the public and a loss of confidence in government.

What's your view of the proposed limitations on banks?

In my opinion, the large banks are, in fact, too big to fail, but the best way to regulate them is to insist upon larger capital requirements and not to limit their activities.

What about proprietary trading?

It's fine as long as you properly risk-adjust the activity and require the proper capital. It's amusing to see the politicians attacking hedge funds. I don't know of any hedge fund that took TARP money that was responsible for the problems we went through the last several years. On the other hand, I can see a lot of reasons to criticize Congress and the executive branch of government.

In 1973, we had a serious energy issue. Thirty-seven years have passed and we still do not have a cohesive energy policy. A decade ago, we read story after story about the errant ways of Freddie Mac (FRE, Fortune 500) and Fannie Mae (FNM, Fortune 500), and what did Congress do about it? Nothing. They wanted everyone to own a home whether they could afford it or not, and that led us into a serious issue. In 2005, Warren Buffett wrote about the financial weapons of mass destruction, derivatives, and how they were growing unchecked and presenting a systemic problem to the system. What did we do? Again, nothing.

Politicians like to create the illusion that hedge funds are a bunch of cowboys running around unchecked. That couldn't be further from the truth. Instead of attacking the hedge funds, Congress should look at itself for the lack of leadership, the lack of intelligent decision-making, the unchecked deficit, and the lack of a program to deal with it.

And what would a Cooperman program consist of?

Number one, a freeze on entitlements, at least for a while. Number two, a VAT tax, which is really a tax on consumption and the best way to get at the underground economy. Number three, an increase in marginal tax rates in the upper income brackets.

Two years ago, there was a consensus about the need to do something, and the Fed stepped up and we got TARP and all the other acronyms. Right now, the government is just sitting here, not doing anything because seemingly we're not in a crisis mode. But our fiscal policy is off the reservation. In the 2002 recession the deficit was about 6% of GDP. It's now running 13% of GDP. Unless things change, the government is not going to get big enough increases in receipts to deal with the challenges we're bound to face.

Hedge funds: They're back!