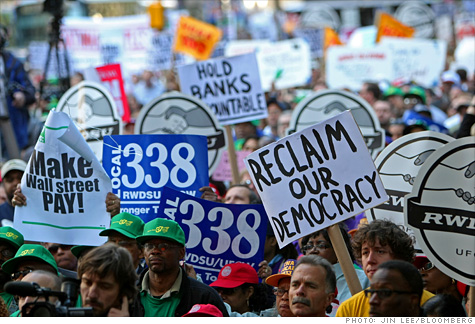 (Fortune) -- A message to all of you angry taxpayers this election season with your cross-hairs trained on the likes of Goldman Sachs and JP Morgan Chase: Did you notice that Fannie Mae just trundled up to the government bailout window for another $8.4 billion, days after Freddie Mac pulled down another $10.6 billion in taxpayer funds?

Probably not. The news was mostly buried in the business pages -- and, besides, how can these nameless, faceless bureaucracies compete for your attention against the turned-out resplendence of profit-making, bonus-dropping CEO's like Lloyd Blankfein and Jamie Dimon? (Especially when these faces of Wall Street greed are being scolded by beet-faced lawmakers purporting to represent the public interest.)

So let's pause for a moment -- six months before the mid-term election, as the White House and its allies skillfully stir your ire at Wall Street as a buffer against likely Democratic losses -- to assess the true state of bailout island, that place that has (rightly) made you so feverishly mad.

You are especially angry over Congress' fall, 2008 bipartisan vote to create the $700 billion TARP -- popularly translated as a "Wall Street bailout" -- and you're ready to hold incumbents in both parties accountable. But as figures compiled by the nonpartisan journalistic investigator ProPublica show, those anti-Wall Street protestors who now routinely park themselves outside Senate office buildings should consider adding a few more signs to their collection.

With the election season here, leftist activists are turning up the heat on their conservative opponents in the Tea Party movement for failing to mount massive protests against Wall Street. After all, anger over the bailouts helped spur the original Tea Party protests, and a Politico poll of those attending the April 15 rally in Washington found that 66% remain "extremely angry" over the issue.

But Tea Party leaders are now mostly talking about those two big government culprits in the housing crisis -- Fannie Mae and Freddie Mac -- and they're right to do so. "Innovative" and "flexible" lending standards enacted by the Clinton administration to help more Americans afford homes became the low- and no-standards enjoyed by speculators as well as people buying places they wouldn't otherwise afford. And looser policies at quasi-governmental, profit-making firms Fannie Mae and Freddie Mac fed that appetite by buying up these mortgages.

By 2001, Fannie Mae was willing to buy mortgages with no money down. Between 2005 and 2007, 40% of its mortgage purchases qualified as subprime or Alt-A (loans made, often to speculators, without the usual underwriting standards), according to Peter Wallison, a leading Fannie/Freddie historian at the American Enterprise Institute. Tax policy encouraged homeowners to cash in on seemingly-ever-rising housing prices by using their imaginary "equity" to buy boats and cars and fancy electronics.

Government policy wasn't the only problem: You can point to the Fed's loose money policies and an influx of cash from China -- and, certainly, Wall Street risk-takers, encouraged by bonus systems, took full advantage of all this rich opportunity while Washington's regulators slept.

Republicans are now trying to block the financial regulation reform bill under consideration in the Senate with complaints that it doesn't reform Freddie and Fannie. Personally, I think this late-to-the-party howling is a political ploy designed to provide much needed cover come November if most Republican senators, as expected, vote against the legislation. What to do about the complex question of what to do with Freddie and Fannie moving forward deserves its own, separate airing.

But I can understand the political motive behind the GOP strategy: Until and unless a more nuanced -- and complex -- story line emerges in the public mind about who is to blame for $536 billion in taxpayer money (so far) spilling out of the U.S. Treasury, Republicans -- successfully painted by the White House as defenders of "Wall Street greed"-- are going to need every ounce of cover they can get.