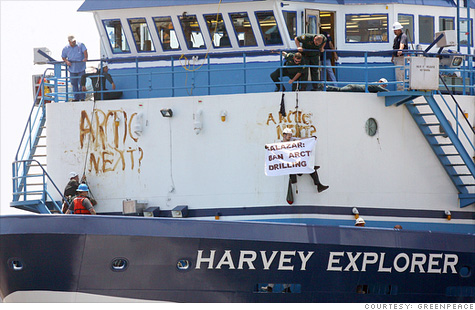 Greenpeace says it used oil from the Gulf spill to write messages on a vessel that will help drill in the Arctic. By Steve Hargreaves, senior writerMay 24, 2010: 4:30 PM ET

NEW YORK (CNNMoney.com) -- Despite the massive oil leak in the Gulf of Mexico, the government is under pressure to issue new permits for offshore drilling as early as next week.

Permits to drill offshore were suspended last month pending an Interior Department safety review after the explosion of the Deepwater Horizon drill rig.

The safety review is due this Friday, and the Obama administration will use it to help decide when and how drilling should resume.

Many argue there should be no new drilling until the investigation is complete. But that will take months. In the meantime, there are thousands of workers who are literally running out of wells to drill.

"They're already starting layoffs in some cases," said Lee Hunt, president of the International Association of Drilling Contractors.

Nearly 30,000 jobs are at stake by midsummer if new permits are not issued soon, said Hunt. Those include jobs on the drill rigs themselves and support positions such as crews on supply boats, caterers and construction yards.

The vast majority of those jobs are not on drill rigs operating in mile-deep water, like the BP (BP)-contracted rig was.

Oil in the shallower water is under less pressure, and therefore easier to control, according to Hunt. In addition, the equipment used to cap the well in the event of an emergency is mounted on the drill rig bottom, not the bottom of the ocean as in the case of the Deepwater Horizon, meaning it can be better maintained.

"Please, don't make it a blanket ban," said Hunt. "There's nothing to be gained."

Hunt has support from many lawmakers.

In a letter sent out last week, 10 senators, including both from heavily impacted Louisiana, urged the Interior Department to begin issuing new permits as soon as possible.

If the moratorium is lifted, one of the first new permits in line for approval could be a Shell plan to drill in shallow water off the north coast of Alaska, in the Arctic Circle.

It would be one of the first offshore Arctic wells in U.S. waters, and Shell is confident it can drill there safely.

Shell wants to start exploratory drilling this summer, noting that it has hundreds of millions of dollars on the line, and that the nation needs the oil.

"Every year we don't drill in Alaska delays the creation of tens of thousands of jobs, energy security and much-needed new oil for the Trans-Alaska Pipeline," said the spokeswoman.

Naturally, many people are against this idea.

"The idea of drilling in the Arctic is unconscionable," said John Hocevar, oceans campaign director for the environmental activist group Greenpeace. "We've never dealt with an oil spill in these conditions. We don't know how."

Hocevar said Shell's emergency plan is inadequate, noting the nearest Coast Guard base is 1,000 miles from their proposed drill site and there are no roads along the surrounding shoreline.

He also said drilling in any shallow water - be it in the Arctic or the Gulf of Mexico- is just as dangerous as deepwater drilling. Hocevar wants no Arctic drilling at all, and no new permits anywhere until a more through investigation is complete and the government agencies that oversee drilling are reformed.

"There have actually been more blowouts recently in shallow water than deep water," Hocevar said. "The depth is less of a problem than the broken system of assessing, permitting and inspecting wells."

At least one analyst thinks Hovecar will get his wish, noting that Interior Secretary Ken Salazar said there will be a delay in permits until the causes of the Gulf accident are understood.

"Although many investors have concluded that drilling will resume at the end of thirty days, it unlikely that Interior will resume approvals for drilling permits," Kevin Book, a managing director at the research firm ClearView Energy Partners, wrote in a recent research note.

He said the group has lined up a delegation of at least 20 senators who support the resumption of drilling shortly after Friday's report.

"We have a lot of support on the economic front," he said. "There's no reason to subject these shallow water rigs to the pause."