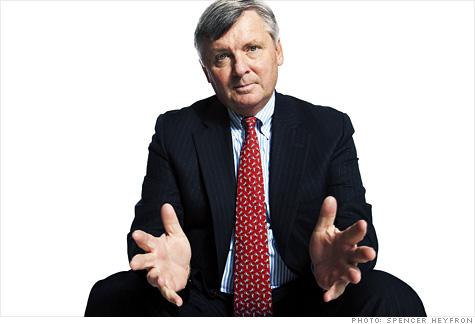 (Fortune) -- As the chairman and chief investment officer of T. Rowe Price, Brian Rogers, 54, sits atop one of the largest mutual fund companies in America. The Baltimore firm, founded in 1937, manages $420 billion for investors across 96 funds and other accounts. A savvy manager known for buying beaten-up blue chips at the right time, Rogers has led the firm's Equity Income Fund to a market-beating annualized average return of 10.6% since 1985. He spoke with Fortune's Scott Cendrowski about the dilemma facing investors and which unloved stocks he's betting on now.

So where should an individual investor put his money?

The investor has a real dilemma. From an asset-allocation standpoint, being safe does not make you any money in today's world. And while most individuals, including myself, expect the Fed to begin to raise short-term rates in the second half of the year, it still will not be immensely profitable to be in a money-market fund any time soon.

When you look at traditional fixed-income investments, you can make 3.5% or so on a 10-year Treasury. That's okay. That's probably not a great rate of return over a decade. I think you can do better in equities, in terms of both current dividend yields and total return potential. So I think the individual investor, who was appropriately shaken by events in the late 2007 to early 2009 period, really has to think about whether he or she is willing to take more risk in pursuit of higher returns in the equity market. And I happen to think tactically that's a good bet even with prices up.

You're betting on a sustained recovery?

Yeah, absolutely. I think after periods of severe economic stress, you tend to have a slow healing process and a pattern of economic recovery that will last a couple of years. And I think we're in the middle of that.

You're known for picking established but somewhat beaten-up blue chips in your Equity Income Fund. What looks attractive now?

Over the past year or so, stocks with financial sector exposure and with cyclical-earnings characteristics have advanced very sharply. Health care, telecommunications, electric utilities, and in some respects energy have been areas that have not been as profitable generally as banking, materials, technology. So if you're a contrarian, one wants to look at areas that have not done as well and venture in and see where there is kind of an attractive risk-return opportunity in good quality companies that have been left in the dust.

Can you name a few?

First of all, a company like Pfizer (PFE, Fortune 500). Despite the fact that it has been quite acquisitive, Pfizer in our view should not be selling at eight times earnings. And by the way, it also has a 4.4% dividend yield, so it yields more than a 10-year Treasury. With 30 million to 40 million people gaining health care coverage in the next few years, its drug business over the long term should be fairly good. And the stock has not been an exciting place to be over the last 12 months. So that's a classic example.

In our view, a relatively safe utility investment is Exelon (EXC, Fortune 500). It trades at about 10 times earnings, with a 4.8% dividend yield and a very high-quality fleet of nuclear power plants. There's been a shift in terms of even the President talking about nuclear power more favorably than any Democratic President ever would have in years gone by.

Agricultural giant Monsanto (MON, Fortune 500) is down precipitously over the past 12 months. Part of the concern is that the company was aggressively raising prices and annoying some of its customers. It doesn't quite fit the high-dividend-yield bill. But it's a good example of a very much out-of-favor growth company that has disappointed investors, and if you look out three years, the prospects are pretty good.

In energy, one of the highest-quality companies in the world to me is Royal Dutch Shell (RDSB), with a 10 multiple and a 5% dividend yield. It has rock-solid financials and a global presence. One of the cyclical areas of the marketplace that ought to be of interest to investors is the energy sector because, certainly as economic growth continues around the world, demand is going to continue to increase.

Any other sectors that you're keeping an eye on?

I think real estate is a really interesting asset class right now, both at the residential and the commercial level. When you look at the housing data in aggregate, it suggests we're coming through, again, a long and winding road of recovery. An investor who wants exposure to that can buy homebuilders or can buy home suppliers. One can invest in Home Depot (HD, Fortune 500), a company in which we have a large investment. There are a lot of ways to do it.

The senator who wants to save your retirement