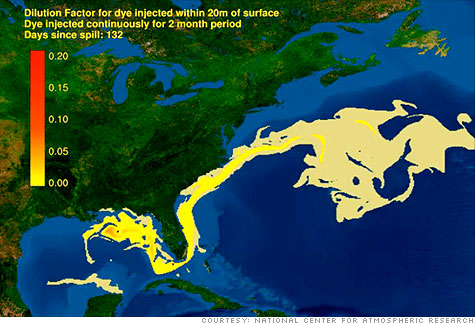 Likley path of the oil for four months following the spill. The colors represent the concentration of the oil. 0.20 (dark red) means the oil is 20% as concentrated as it is directly over the spill site. Steve Hargreaves, senior writerJune 5, 2010: 1:07 PM ET

NEW YORK (CNNMoney.com) -- The bad news is: Things in the Gulf of Mexico could get a whole lot worse.

So far, the leaking BP well has spewed out as much as 630,000 barrels, making it the worst oil spill in U.S. history.

BP (BP) continues to try ad-hoc fixes, which have included filling the hole with bits of old tires and placing an upside down funnel over it. On Thursday night, the company said it had put a cap on the ruptured well in an attempt to channel the oil to a tanker on the surface.

While hoping for the best, most people are now planning for the worst. That means, at the earliest, waiting until August, which is when BP says a relief well should be completed.

The ruptured well needs to be filled from the bottom. The relief well is supposed to intercept the failed well where it ends, about 18,000 feet underground.

Once the wells intersect, BP will inject massive amounts of heavy mud -- much heavier than the oil -- from the new well into the leaking well. The same pressure that is currently pushing out the oil will also force the mud up the well hole. Once there's enough mud in the failed hole, the leak should stop.

But what if the relief well doesn't work, or takes longer to work than expected? How bad could things get in the Gulf?

How much oil: BP wouldn't say how much oil is in the reservoir below the failed well, saying it was too early in the exploration process to make such estimates.

But it's at least tens of millions of barrels, according to Dave Rensink, president of the American Association of Petroleum Geologists.

If the well was left unchecked, it would flow for years, he said. Deep sea offshore wells generally produce oil for 5 to 20 years.

The relief well: Industry experts say it is likely BP will be able to cut off the flow sometime around August.

"Getting down there and initiating the kill process by August shouldn't be a problem," said Rensink. "BP will be able to get this under control."

Another petroleum engineer agreed. "I don't see any reason why it can't happen," said Ken Arnold, an engineer and oil and gas consultant. "Other than the fact that BP can't get a break, no matter what they do."

Indeed, the successful drilling of the relief well by August remains far from certain.

When a similar blowout occurred off the coast of Mexico in 1979, the state oil company said it could fix the problem with a relief well in three months. The effort ended up taking nearly 11. And that was in a much more shallow location -- 165 feet of water versus 5,000.

The challenge is getting the relief well and the failed well to intersect. It's like trying to hit an object the size of a plate, three miles beneath the earth's surface, said John Hocevar, oceans campaign director for Greenpeace.

Plus, operations will have to be suspended if a hurricane threatens the Gulf.

"Realistically speaking, I'd say we're stuck with this for a long time," said Hocevar. "More likely past August, December would not surprise me at all."

The path of the oil: As the oil continues to leak, the danger is it will soil more sensitive Gulf marshes, he said. Worse, it could head to the Florida Keys, ruining the most pristine coral reefs in the continental United States -- a prime breeding ground for hundreds if not thousands of species.

Beyond the Gulf, there is a danger the oil could get caught up in the Gulf Stream, which would send it up the eastern seaboard.

Hovecar said that even if the Gulf Stream stayed well offshore, significant amounts of oil could get spun off by eddies, and ultimately end up onshore as far north as Maine.

The oil could then follow the Gulf Stream to Europe, although by the time it made landfall over there he said the amount would be significantly reduced.

All of this would impact local economies and wildlife.

A BP spokesman said the company remains confident it can seal the well by August. He noted that seismic imaging technology, which allows engineers to "see" under the ground, has come a long way since the Mexican spill, progressing from 2-D to 3-D or 4-D.

Plus, if workers miss the well the first time, they can back up the drill bit and try again without having to start from scratch.

Rensink, the petroleum geologist, said that the Mexico well was not cased in metal, like the BP one is. With a little bit of luck, the metal should make the well easier to find.

A little bit of luck is just what BP needs right now.