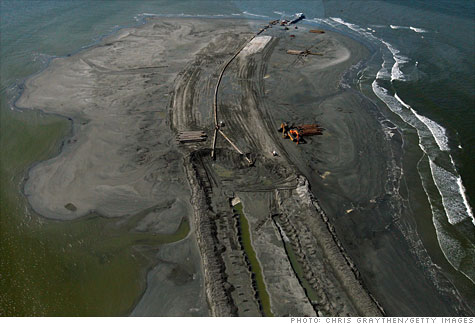 Federal authorities have halted this barrier island dredging project near the Chandeleur islands in the Gulf of Mexico, saying the area is environmentally sensitive. By Shelley DuBois, reporterJune 24, 2010: 4:55 PM ET

FORTUNE -- Oil looks terrible right now. And while nobody wants to need what's gushing into the gulf, poisoning marine life and coating the coasts, our way of life depends on it. In fact, the U.S. needs the oil from the Gulf Coast and the jobs that deepwater drilling generates so badly, we can't afford to pause long enough to overhaul the regulators.

On May 30, President Obama issued a six-month drilling moratorium in the gulf, as recommended by Secretary of the Interior Ken Salazar. On June 7, a company called Hornbeck Offshore Services, which transports people and supplies for deepwater-drilling companies, led the charge challenging the moratorium.

Hornbeck argued that the moratorium had brought its business to a standstill and done the company irreparable financial damage. It was unconstitutional, the company charged. Judge Martin Feldman agreed, blocking the moratorium. The White House plans to appeal, but for now it looks as if companies in the gulf will drill again soon.

Do we have a solid system in place to regulate them?

The scrutiny of big oil since the Deepwater Horizon disaster has drawn attention to the Minerals Management Service-the government organization charged with issuing drilling licenses and regulating drilling practices, which has since been renamed the Bureau of Ocean Energy Management, Regulation, and Enforcement

The lawsuit from Hornbeck cites the fact that 29 of the 33 wells permitted in the gulf have passed MMS inspection and shouldn't be penalized. The question is whether an MMS inspection has any value.

"The regulatory agency can't be a political afterthought to somebody who was a minor-scale political campaign contributor, and that's how it's been historically," says David Dismukes, the associate director and a professor at the Center for Energy Studies at Louisiana State University. He says that in his experience with the MMS, the organization is generally full of people who want to do their jobs well, but don't have enough support.

It hasn't been a problem until now, says Dismukes. The Deepwater Horizon is the only production-related disaster in deepwater, ever.

"If you look, this is a freakish anomaly," he notes. "The safety and environmental performance has been good. The accidents and spills have been going down consistently." He says that regulators probably got complacent because the industry was doing so well. In this case, "success can be your worst enemy."

Since the U.S. can't afford to stop drilling in the gulf it can't afford to be complacent, even in success - the regulator and drillers have to bat 1.000 in deepwater operations. This spill is what happens when they bat .999.

The size of the oil economy

Offshore drilling in the gulf directly contributes to about 6% of the total U.S. GDP, estimates Omowumi Iledare, a professor of petroleum economics at Louisiana State University's Center for Energy Studies. The U.S. uses almost 20 million barrels a day, according to the U.S. Energy Information Administration. Any that we don't buy from ourselves we must buy abroad, and that adds to the U.S. trade deficit.

The gulf region also depends on the jobs that oil provides to people working on or around the rigs. Tens of thousands of jobs in the Gulf of Mexico are tied to offshore drilling.

This means that the economy would take a hit even if the government put laws in place in the future that slowed production. Outside the U.S. it now takes 80 months on average between getting a license to drill and producing the first barrel. In the U.S. it takes 60 to 65 months on average. To remain a competitive offshore drilling territory, America needs to keep that lag time down, says Iledare.

The gulf is appealing for many reasons. The terrain is well known, it's surrounded by a relatively large amount of skilled workers, and it still has a lot of oil to give. The government couldn't afford to permanently shut down the gulf, and it never intended to: The now defunct moratorium was meant to ensure that existing drilling projects could get the appropriate oversight.

That wouldn't take an MMS overhaul, says Dismukes. Ensuring safe drilling in the gulf would mean checking quickly to verify that everybody is following protocol, especially in terms of fail-safes like blowout preventers-the piece of equipment that didn't work in the Deepwater Horizon incident; it's the last line of defense on any rig.

Then the MMS needs to have the same cachet and respect as other government regulators, like the Department of Energy or the Department of Defense. It needs good leadership. And it needs not more rules, but the ability to enforce the ones it does have, says Dismukes.

If the government does increase safety measures, it shouldn't make it more difficult to drill, says Erik Molito, director of upstream and industry operations for the American Petroleum Institute. "I think a lot of this is already being done."

But there's good evidence that that wasn't the case in BP's (BP) recent spill. Reports to the MMS show that there were cracks in the well up to two months before the rig exploded. The MMS also allowed BP to delay the test of its blowout preventer. Since the accident, rig workers have said that they had noticed problems, which were ignored. That would never happen at a nuclear plant, says Dismukes, and perhaps the oil industry needs to think about disasters the same way-low incidence, low risk, but high consequence.

However, oil differs from nuclear power in an important way: Crude turns to cash incredibly fast. Companies are under pressure to produce quickly, says Iledare, and that's a good thing. But it means the industry has to restructure so that people who have the power to stop a project will do so. Oil companies need to think about long-term returns-wells can produce for 30 years-and that won't happen when rig managers are worried about losing even a few minutes to safety-related delays.

Workers on rigs have to be able to voice their complaints, and regulators have to understand the technical aspects of drilling.

What BP was missing on Deepwater Horizon: a whistleblower