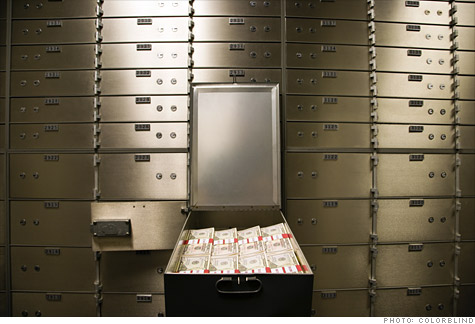 FORTUNE -- With record cash on hand and a swell of profits at many large companies, it's hard not to wonder if corporate America has what it takes to help turn this sluggish economy around.

But hiring new employees isn't the only way that companies sitting on piles of cash can help stimulate things. Not enough companies are using this time to invest in their future growth without adding to headcount. Investment spending this year on new equipment, buildings, product development, research and other projects has picked up this year, but still falls short of levels seen before the recession.

It isn't for a lack of resources. Non-financial companies in the S&P 500 index reported $837 billion in cash at end of March, a hefty 26% increase over the previous year's $665 billion, according to S&P. These are unusually high levels -- companies are holding cash reflecting 10% of their value today. Since 1999, companies on average held cash equal to 6.6% of their value.

In many ways, the record levels reflect the scars of the financial crisis. Chief executives learned the hard way what happens when credit markets freeze, as they did in late 2008 and early 2009. And the country's relatively grimmer economic forecasts aren't helping as consumer spending continues to slump. The U.S. Commerce Department reported last week that GDP growth slowed during the second quarter, growing by 2.4% compared to 3.7% the previous quarter.

But while companies try to play it safe by upping their stashes of cash, hoarding does little good in the way of improving the broader economy. What's more, it could hinder companies from prepping for future growth.

To their credit, many companies have reported rising profits amid a painfully slow recovery. But they've come at the expense of jobs. Faced with weak sales, executives have cut costs and hesitated from hiring, bringing no relief to the nation's stubbornly high jobless rate of nearly 10%.

Caterpillar (CAT, Fortune 500) is one of the few large companies hiring these days. The Peoria, Ill-based maker of construction and mining equipment, engines and turbines cut 20,000 workers last year but could possibly hire as many as 9,000 this year.

Indeed, headcount is a huge investment and perhaps the costliest for many businesses. It's hard to rationalize hiring when consumer demand has remained sluggish and experts predict a sluggish economy for the foreseeable future. But the slow recovery shouldn't keep executives from investing their company's stash of cash in things such as new equipment, research and product development -- investments that typically help companies become more competitive while stimulating overall economic growth.

For instance, Harley-Davidson (HOG, Fortune 500) reported that profits more than tripled from a year ago in its latest quarter, thanks to cost cuts and improvements in the company's financial services business. The Milwaukee-based motorcycle manufacturer expects to slash 1,400 to 1,600 jobs by the end of next year amid weak sales, on top the 2,000 jobs cuts made last year. It held $1.5 billion in cash at the end of the quarter, up 46% from around the same time last year.

Although Harley expects to reduce up to one-third of its workforce, it does plan to invest between $235 million to $255 million this year in new equipment and product development. This spending comes close to pre-recession 2007 and 2008 levels, although roughly half of that is related to the company's restructuring plans to deal with weaker sales.

And Pfizer (PFE, Fortune 500), which expects to announce second-quarter earnings tomorrow, plans to invest more in research, new equipment, property and plants following its 2009 acquisition of Wyeth Pharmaceuticals. Last year, Pfizer announced it would reduce the combined company's global workforce by 15% following the acquisition. For 2010, it expects to invest $2.2 billion in capital (including acquisition-related expenses), an increase from the previous year's $1.2 billion in spending.

Spending on new computers, software and other equipment is expected to increase this year overall, although not to levels seen before the recession, says Nigel Gault, chief U.S. economist at IHS Global Insight. Investment in equipment by the largest U.S. companies is expected to jump 12%, after spiraling down nearly 17% last year.

And all that cash sitting in short-term investments across corporate America hasn't gone unnoticed by shareholders. If they're not going to spend it on stimulating the economy, stockholders argue, they may as well return it to them. Companies are increasingly relenting to that pressure and have begun bumping dividend payments.

Last month, GE (GE, Fortune 500) announced plans to boost its dividend by 20% to 12 cents per share per quarter. During the financial crisis, the company cut quarterly payments by 68% to save money as it suffered growing losses from its finance business, GE Capital. This latest hike doesn't come close to closing that gap, but shareholders see it as progress. Similarly, during the first quarter this year, Intel (INTC, Fortune 500) raised dividends by 12.5%. The Santa Clara, CA-based chipmaker's cash balance has risen 58% over the past year.

Still, the payouts aren't nearly at the levels they were in late 2007 and only modestly higher than they were a year ago, according to S&P. S&P 500 companies paid about $50.4 billion in dividends in the second quarter, up 5.9% from last year but far below the $67 billion payout in late 2007.

Memories of the financial crisis are deep. Worries grow that the nation may slip back to a recession. Yet standing frozen on a stack of cash does little to improve the country's economic prospects.

Is deflation the problem that will throw us into a depression?