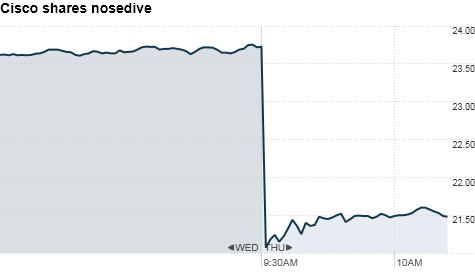 NEW YORK (CNNMoney.com) -- After missing Wall Street's sales expectations for the past quarter, Cisco saw its stock plunge 10% Thursday, bringing down much of the tech sector with it.

What worried Wall Street analysts was Cisco's outlook for the current quarter: The company said it expects revenue to rise between 18% and 20% in the current quarter from last year's results, slightly lower than the increase of 21% analysts had forecast.

Even though the company is reporting healthy results, the lower-than-expected guidance renewed fears of a slowdown in the global economy.

Other tech stocks fell as well. The Nasdaq Composite Index (COMP), which some use as a gauge for the tech sector as a whole, fell 0.7% Thursday, about double the drop in the Dow Jones industrial average (INDU) and the broader S&P 500 index (SPX).

Shares of RIM (RIMM) fell 2% on Thursday after India issued an ultimatum to BlackBerry maker Research In Motion. The Indian government said RIM has until August 31 to give the government access to information relayed on two popular messaging services. After that, India said it would take steps to block the encrypted messaging systems that the government says pose threats to the country's national security.

-- CNN Wires contributed to this story

Cisco profit up 79%, but sales disappoint