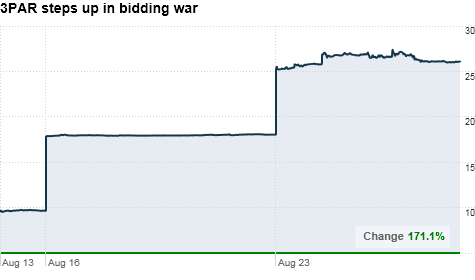 Both Dell and HP submitted bids for the company last week, but HP raised its bid to just under $1.6 billion after Dell's initial $1.15 billion offer was announced publicly. On Wednesday, 3PAR told Dell that Dell had three days to raise its offer, or it would go with HP's deal.

"Not only is our offer superior to Dell's proposal, HP remains uniquely positioned to execute on this combination given the number of synergies between the two companies," said Dave Donatelli, general manager of HP's servers and storage unit, in a prepared statement.

3PAR had previously been a relatively unknown data storage company that wasn't necessarily considered a takeover target before the bidding war emerged. The rival hardware companies are both accelerating their cloud computing offerings for their customers, which requires a tremendous amount of storage capacity.

Some analysts say the bidding war is more about keeping an asset away from the other than actually wanting to buy this particular company.

"The data storage business is becoming heated as companies ramp up their cloud offerings," said Eric Johnson, director of the Center for Digital Strategies at Dartmouth University's Tuck School of Business. "You can see motivation on either one's part not to let 3PAR fit into another one's hand, but whether 3PAR is a company everyone needs to have is a different story."

Shares of 3PAR (PAR) rose 6% in after hours trading to $27.60, suggesting some investors think Dell will yet again outbid HP. 3PAR's stock fell 3% during normal trading hours, as investors had believed Dell's second offer would be even higher.

Bidding war between HP and Dell