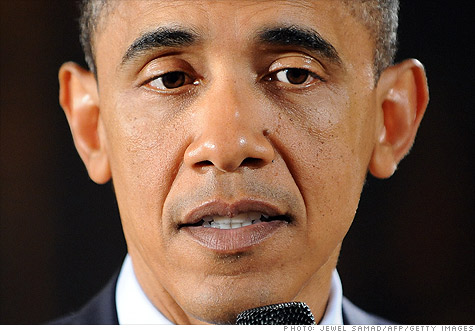 Obama had asked the group to examine ways to simplify the code, reduce tax evasion, and close corporate loopholes -- and to do so with an eye to raising more revenue.

The president, however, also tied the group's hands by not allowing it to consider any options that would raise taxes on the vast majority of Americans.

In other words, the panel wasn't allowed to consider anything that would tap 98% of the country.

By constraining the task force, he essentially closed off any hope that the panel would consider ways to fully reform the tax code.

That's because in order to both simplify the code and raise more revenue, lawmakers would need to jettison or scale back many of today's credits, deductions and exemptions. But Obama's pledge would make that very difficult.

"Tax breaks are not limited to people making over $250,000," said Rutgers economics professor Rosanne Altshuler, who served as the senior economist for President Bush's bipartisan tax reform commission in 2005.

Case in point: work-based health insurance. Any money an employer pays toward the premiums and other medical costs for employees is treated as tax-free income to workers. That tax break and the mortgage interest deduction are the two most expensive -- and popular -- tax breaks on the books.

Taken as a group, tax breaks reduce federal revenue by more than $1 trillion every year.

All those tax breaks are a key reason why nearly half of all tax filers end up owing no federal income tax. Congress has chosen to administer social policy through credits and deductions designed to encourage people to do things like buy houses and save for retirement, according to Roberton Williams, a senior fellow at the Tax Policy Center.

Once a tax break is passed into law, it's hard to eliminate. And there's very little follow-up by lawmakers to assess whether it's working or not, disproportionately rewarding one group of taxpayers over another.

The upside to streamlining tax breaks and simplifying the code is that it can lower overall tax rates while bringing in even more revenue than before.

Report likely to be overshadowed

Tax experts aren't exactly waiting with bated breath for the task force's report because all eyes are on Obama's bipartisan fiscal commission, which he created to recommend ways to effectively curb the growth rate in U.S. debt. The president said he wanted the debt panel to consider "everything on the table."

The expectation is that the commission will address head-on the fact that the fiscal outlook can't be cured on the backs of taxpayers making more than $250,000 alone.

"[A]ny plausible plan to set this country on a sustainable budget path will require higher tax revenues, borne by the majority of Americans," tax expert Edward Kleinbard wrote in a recent article titled "Sacred Tax Cows: It's them or us."

Obama has said he will take the fiscal commission's report into consideration when he puts out his 2012 budget proposal in February. He has promised that he will "start presenting some very difficult choices to the country."