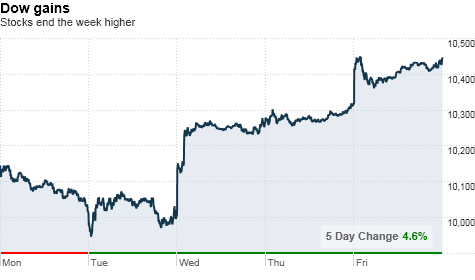 NEW YORK (CNNMoney.com) -- Stocks closed near session highs Friday, with the Dow erasing its losses for the year, as investors welcomed a better-than-expected report on the U.S. job market.

All three major gauges ended the week with gains. The Dow added 2.9% this week, while the S&P 500 rose 3.7%, and the Nasdaq advanced 3.7% over the last five days. It was the first weekly gain for all three gauges in three weeks.

The better-than-expected jobs report, which came on the heels of improved manufacturing data earlier in the week, helped ease some concerns about the economy. But a report on activity in the services sector came in weaker than expected.

"It's all about the payrolls number," said Tom Schrader, managing director at Stifel Nicolaus.

While the jobs data suggests the economy could avoid a "double-dip" recession, he said investors remain nervous about the outlook for short-term growth. In addition, concerns about growth in China and lingering debt problems in Europe also continue to weigh on the market.

"There's still a lot to worry about," Schrader said.

Trading volume was light with many market participants on vacation. On the New York Stock Exchange, advancers beat decliners by roughly two to one on volume of about 1 billion shares.

Looking ahead, there are relatively few economic reports for investors to digest next week and one fewer trading day on the calendar. U.S. markets will be closed Monday for the Labor Day holiday.

Economy: The government's widely anticipated jobs report showed that the U.S. economy lost jobs for a third straight month in August, but employers cut fewer positions than economists had forecast.

The economy lost 54,000 last month. That compared with 131,000 jobs shed in July. Economists were expecting employers to slash 121,000 positions in August.

"Payrolls continue to be added in the private sector, but at a painfully slow pace," said Jim Baird, chief investment strategist for Plante Moran Financial Advisors. "Companies remain in a preservation mode and have continued to seek out alternative ways of increasing production."

Meanwhile, the Institute for Supply Management's (ISM) services index slipped to 51.5 in August from 54.3 in July. Economists had forecast a decline to 53, according to consensus estimates from Briefing.com.

Currencies and commodities: The dollar fell against the euro and the British pound but was higher versus the Japanese yen.