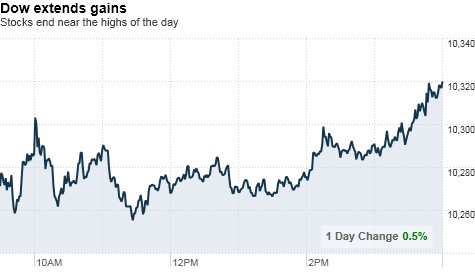 NEW YORK (CNNMoney.com) -- Stocks pushed higher at the end of a listless session Thursday, extending gains from the previous day, as investors prepare for a critical report on the U.S. job market on Friday.

Stocks were supported by better-than-expected sales from major U.S. retailers and an increase in pending home sales. But the tone was relatively subdued following a big rally on Wednesday and ahead of the government's monthly jobs report on Friday.

"The market is holding its own," said Peter Cardillo, chief market economist at Avalon Partners. "The fact that we're holding yesterday's gains is a good indication that we could rally after Labor Day if the jobs report is within expectations."

The job market has been a major source of worry on Wall Street. Consumer spending, which drives the bulk of U.S. economic activity, is closely linked to unemployment.

In particular, investors are eager to see signs that private sector employers could begin hiring again as public sector jobs related to the Census have disappeared.

"It all depends how bad that private sector number is," said Cardillo.

On Wednesday, payroll processing firm ADP said private sector employers cut 10,000 jobs in August -- a drop from the downwardly revised 37,000 jobs they added the month before. Economists had expected the report to show an increase in private sector payrolls.

Friday's report to is expected to show that employers cut a total of 120,000 jobs in August after payrolls fell by 131,000 in July, according to economists surveyed by Briefing.com. The unemployment rate is forecast to rise slightly to 9.6%.

Meanwhile, trading volumes continued to be light Wednesday as many market participants are on vacation this week. On the New York Stock Exchange, just under 1 billion shares traded hands.

After closing out a dismal August, stocks rallied more than 2% on Wednesday to start September on a strong note. But the market is still down between 1% and 3% year to date.

Sales tracker Thomson Reuters said 65% of the retailers in its index, that have reported sales so far, have beat expectations.

Economy: Weekly jobless claim figures dipped slightly, by 6,000 claims, to 472,000 in the week ended Aug. 28. Economists expected the number of Americans filing new claims for unemployment insurance to have edged up slightly last week to 475,000.

Pending home sales -- a forward looking gauge -- rose 5.2% in July, according to an index from the National Association of Realtors. But the index, which is based on sales contracts signed in the month, was down over 19% from July 2009. Economists had expected pending home sales would be flat in July.

Separately, the government said factory orders rose 0.1% in July, versus a forecasted 0.3% gain. But the Commerce Department said orders fell 0.6% in June, an improvement over the originally reported 1.5% drop.

The Labor Department said labor productivity in the non-farm business sector fell at an annual rate of 1.8% in the second quarter of 2010. The drop came as hours worked increased 3.5%, the largest quarterly gain in over four years, and output rose 1.6%.

The drop in productivity was roughly in line with estimates from private sector economists.

Companies: Shares of Mariner Energy (ME) fell 2.5% after a fire occurred on an oil and gas production platform the company owns in the Gulf of Mexico.

All 13 people onboard the Vermilion 380 have been accounted for, Mariner said. They are currently investigating the causes of the incident. The company said an initial flyover found no indication that oil or gas had leaked as a result of the fire.

Burger King (BKC) said Thursday that it has agreed to be acquired by investment firm 3G Capital in a deal valued at $4 billion. Shares of the fast-food company rose 25% after surging 14% in the previous session on rumors of the deal.

World markets: European shares were essentially flat. The CAC 40 in France gained 0.2%, while Britain's FTSE 100 and the DAX in Germany were both little changed.

Currencies and commodities: The dollar slipped against the euro and the Japanese yen, but edged higher versus the British pound.