Fiat 500: Chrysler's salvation might be a hit -- south of the border 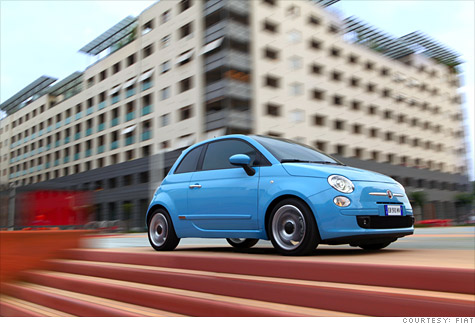 FORTUNE -- The elfin Fiat 500, scheduled to arrive in U.S. showrooms before New Year's, will surely be a hit with some. The important question is: How few?

Chrysler, which is controlled by Italy's Fiat Auto, needs a small car to compete against formidable subcompacts like Honda Fit, Ford Fiesta, Toyota Yaris, Hyundai Elantra and Chevrolet Aveo. With its smallest two-cylinder engine, the 500 gets 56 miles per gallon on the highway, an eye-opener for eco-enthusiasts.

Yet Fiat is an unfamiliar brand to most Americans -- probably not all bad since those old enough to remember its exit from the U.S. in 1984 associate the name with a reputation for shoddy quality.

Sergio Marchionne, chief executive of Chrysler and Fiat Auto, has an ace up his sleeve. By building the 500 at Chrysler's Mexico assembly plant in Toluca, he gains a labor-cost and currency advantage, plus a superb doorway to South America, where Fiat already is a major force.

"Mexico has excellent trade relations with Brazil and the EU, so there are many export possibilities," said Michael Robinet, a automotive production analyst with IHS CSM Worldwide in Northville, Michigan.

Marchionne, who invested $500 million in Toluca, likely has studied the viral marketing of BMW's Mini. Like Mini, the 500 is a retro-styled vehicle meant to recall its iconic predecessor that sold between 1957 and 1975. Among BMW's stunts back in 2001 was mounting its Mini on top of a large SUV, which drew stares as it drove though U.S. cities.

On August 30 Marchionne invited several hundred Chrysler dealers to Detroit in a bid for commitments to sell the 500, hardly a slam dunk since dealers must invest in separate showroom space, tools and parts. The deadline is Sept. 22 to submit applications, from which Chrysler could grant between 150 and 200 franchises.

"Chrysler will have to teach dealers how to sell the 500,'' said Robinet. "They're used to selling Ram pickup trucks and Jeep Grand Cherokees. They'll be dealing with a different mindset.''

With gasoline cheap and the U.S. automotive market down a third from its peak earlier in the decade, Fiat probably couldn't have picked a worse time to re-enter the U.S. But the 500, if the car clicks, it could be just the beginning of a new Italian wave.

Fiat also is planning to import its sporty Alfa Romeo brand, starting in 2012. And the 500 could be restyled and rebadged to create small cars for Dodge or maybe even Jeep.

One wild card is gasoline prices. New federal regulations will force automakers to build progressively smaller, more fuel efficient vehicles throughout this decade. But fuel prices have remained low -- currently less than $2.80 a gallon for regular in Detroit -- meaning that many American consumers don't see much reason to switch from the larger, less efficient models they prefer.

If gasoline prices shoot higher -- and stay high for a while -- all subcompacts, including Fiat's, will look more attractive. Worries over gasoline are why lots of Americans flocked up to the homely and shoddily-built Volkswagen Rabbit after the second oil embargo.