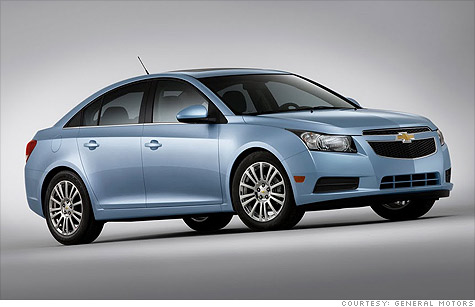 The Cruze: Chevy on the outside - Opel underneath By Alex Taylor, senior editor-at-largeSeptember 2, 2010: 11:45 AM ET

FORTUNE -- As General Motors gets ready to take its show on the road in support of its initial public offering after Election Day, one of its biggest question marks is the future of Opel and its European division.

It has been sucking money for two decades and has resisted GM's best efforts to resize its operations and pump some life into the brand.

The latest drag was announced in August when GM agreed to pay its European division employees up to $1.4 billion if the automaker fails to live up to its promise to revitalize Opel's product line by 2014. Earlier this year, GM agreed to invest $14 billion over five years to overhaul 80% of the unit's lineup.

People at GM's headquarters in Detroit must be scratching their heads at the decision last year to keep Opel after they spent six months trying to sell it. The European market has been a no-growth quagmire for years, and some observers see little room for Opel in it. It is squeezed in by a powerful Volkswagen from the top while fighting for room in the middle with Renault, Peugeot, Ford, and a resurgent Fiat.

Opel's decline continues. According to the Detroit News, the market share for Opel and its sister brand Vauxhall, sold in Great Britain, slid to 8.4% in the first half of 2010 from 8.9% in the same period a year earlier.

When GM filed for bankruptcy more than a year ago, it was negotiating with three potential Opel investors. On September 10, GM agreed to sell 55% of Opel to Magna, the big Canadian parts maker, and its Russian partner. The deal required the approval of the German government and would have kept Opel a fully-integrated part of GM's global product development organization.

But then on November 3, GM's board of directors suddenly and unexpectedly called off the Magna deal. The board reportedly questioned how GM could execute its global business plan without Opel and the rest of Europe.

Fritz Henderson, then GM's CEO, who had pushed to unload Opel, explained that Europe's business environment and GM's overall health had both improved in the preceding six months so a sale wasn't necessary.

It was an embarrassing reversal for Henderson, as the former head of GM Europe should have had the board on his side. A month later, he was out as CEO, and his about-face on Opel was a big reason. He clearly had gotten badly out of step with the directors and their chairman, Ed Whitacre.

Since then, nothing has gone right for Opel. Expensive government scrappage incentive programs are coming to an end, and analysts are slashing their European sales forecasts. And in June, Germany rejected GM's request for $1.3 billion in aid to restructure Opel.

Now GM now has to come up with $4 billion on its own for the restructuring -- in addition to the money it is spending on new models. The automaker is expected to cut 8,000 jobs in Europe, extract labor cost concessions from the existing workforce, and reduce its production capacity by 20%.

Some have argued that Opel is essential to GM because it provides engineering on passenger cars. Opel's Delta small car platform is the basis for the 2011 Chevy Cruze, and Opel's midsize platform underpins the Chevy Malibu. Under the skin of the well-received 2011 Buick Regal is an Opel insignia.

But Europe has the worst growth prospects of any continent in the GM empire. Its costs remain stubbornly high and its unions resistant to any sort of change. Speedily, GM is becoming an Asia-oriented company. Already, more GM branded cars are sold in China than in the U.S.

It makes more sense for GM to build up its engineering operations in China, as well as continue its successful small car venture with Daewoo than it does to continue to prop up its perennial money loser in Germany.

Fritz Henderson is now working as a consultant to GM at the rate of $59,090 a month. New CEO Dan Akerson may want to get his money's worth and find out what this GM lifer thinks about Opel before GM takes it on the IPO road.