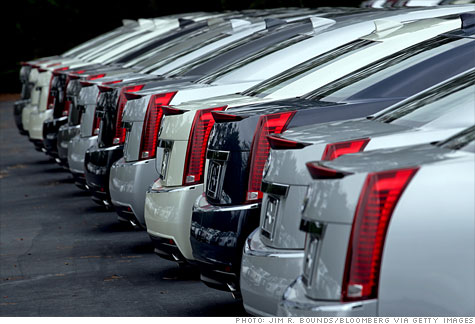 FORTUNE -- No less than former auto czar Steve Rattner said a key reason the U.S. decided to rescue General Motors is because his team believed GM's vehicles are much better than their reputation. Eventually, according to their reasoning, buyers must wake up and GM will be rewarded with stronger sales and better pricing, leading to improved financial performance.

The theory better come true shortly for the sake of the U.S.'s $50 billion investment. GM's expected initial public offering of shares in November so far is being shadowed by a softer-than-expected market for new vehicles in the U.S., one that is treating the nation's No. 1 automaker with particular cruelty. Though GM's retail sales are up 6.3 percent through September, compared to an abysmal 2009, the company's share has slipped to 19.1 percent from 19.4 percent a year earlier.

Much of the slippage is due to the comparison against sales a year ago, when GM was still selling its now discontinued Saturn, Pontiac, Hummer and Saab brands. The share of GM's most important Chevrolet division, promisingly, is up more than a point from a year ago. (The U.S. market shares of Ford Motor (F, Fortune 500) and Chrysler both are higher year-over-year.)

The more pressing difficulty for GM than a market-share loss is the fact that the overall inventory of unsold vehicles from all automakers is creeping higher. Forecasters had expected the 2010 automotive market to approach 12 million sales; instead it may come in below 11.5 million sales. If demand doesn't improve soon, automakers including GM will face increasing pressure to slow production. Slower production translates instantly to lower revenue and profit.

"I'm beginning to be concerned about the inventory building,'' said Tracy Handler, an analyst at IHS Global Insight in Northville, Michigan. By her count, the inventory stands at about two million vehicles and is trending higher.

With the IPO pending, GM is in a double bind: If GM builds vehicles aggressively and lets its inventory balloon, thereby necessitating discounts, it will be abandoning the promise of the new management to show manufacturing discipline in order to improve pricing of cars and trucks. But if GM trims production, it will be accepting a hit to revenue and possibly a market-share loss if other producers decide to stay aggressive. Neither choice will be regarded as positive by investors.

"For the IPO there might be some incentive to build stock,'' said Handler. Automakers can boost retail sales in the short term, while deferring the costs that go with promotional lease and discount programs. In his first weeks in office, new GM CEO Dan Akerson will encounter for the first time the tricky business of deciphering retail demand and deciding precisely how many cars and trucks to build.

The best possible development for GM and its investment bankers are a few months of stronger-than-forecast sales, reinforcing expectations that the U.S. auto industry is returning to its historic pattern of rapidly accelerating recovery after a recession. New GM shares might soar, validating Rattner and Team Obama. But that rebound so far is nowhere on the horizon.